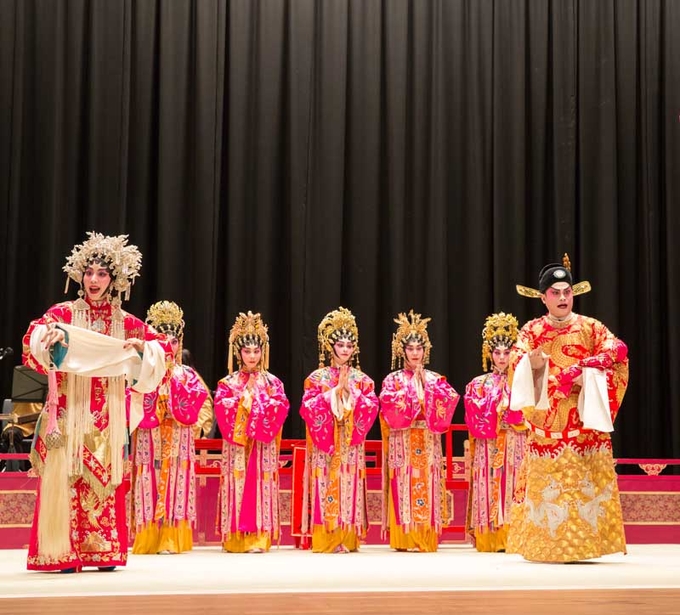 Organised by the Faculty of Arts, the “Lingnan Arts Festival 2017” held from 28 February to 30 March presented a rich cornucopia of musical and cultural events on campus.

Since its inception in 2011, the Lingnan Arts Festival aims to bring various forms of arts from Hong Kong as well as other parts of the world to Lingnan.  Students and staff have been able to enrich their cultural well-being through enjoying and taking part in a variety of arts and cultural activities.

The Opening Event of this year’s Arts Festival “Reviving the Almost Lost Versions of Three Routine Plays in Cantonese Opera – The Sung Version of Eight Immortals Bestowing Longevity, the Male and Female Versions of Blessing of Promotion, and the Grand Scale Version of The Heavenly Maiden Delivers Her Son to the Mortal Father”, produced by the Chinese Artists Association of Hong Kong, was held on 2 March.  As preludes, the “Reminiscence of Cantonese Melodies – Cantonese Operatic Saloon Music Seminar and Concert” and a pre-performance talk for the Opening Event namely “Reviving the Almost Lost Versions of Three Routine Plays in Cantonese Opera” was held on 27 and 28 February respectively.  Other fabulous programmes included the workshop “First Person Plural, Storytelling by The Collective ‘We’” by Lingnan’s Writer-in-Residence Ms Sreedhevi Iyer, the seminar “Visualizing the Invisible; Drawing as Speculative Practice” by Lingnan’s Artist-in-Residence Mr Douglas Stichbury, the comedy Chinglish performed by Lingnan students, and a wide range of other Chinese and Western music and dance performances as well as movie screenings.

Lingnan’s brand campaign sets out to tell its brand essence