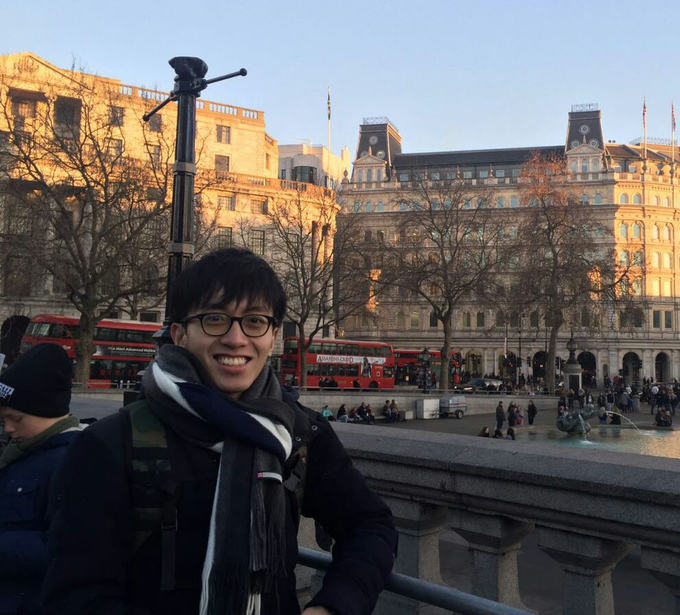 Time is scarce.  As Dr Stephen R. Covey said, “The key is in not spending time, but in investing it.”  Given the scarcity of time, let’s see how William Chan Wai-chuen, one of our outstanding alumni, made the best investments of his time at Lingnan.

Graduating with first class honours in Philosophy, William recalled how Lingnan has helped him discover his academic interests.  “I have not been interested in political philosophy until I took the common core module ‘Understanding Morality’, which outlined basic normative questions about morality and politics.” He was impressed by how his teachers immerged him into a field he had never come across in secondary studies.  “The course has led me to read A Theory of Justice written by Prof John Rawls.  I was deeply attracted by the intelligent ideas of the book and since then have become obsessed with issues about social justice.”

William’s road of success was built up through stumbles.  While William stepped into the world of political philosophy with passion, his unsatisfactory results during the very first semester struck a blow against the freshman’s learning efforts.  As a blessing in disguise, the hurdle did not obstruct William but prompted him to go the extra mile.  “Not only did I regularly seek advice from my teachers and friends, but I also immersed myself in reading introductory books to gain a solid foundation for my philosophy studies,” he took action to remedy his inadequacies.  With persistence and perseverance, he reaped a bumper harvest of Wu Chiang Wai Fong Scholarship and Lingnan University 1947 Class (65th Anniversary) Scholarship, and earned his place on President’s List and Dean’s List as well.

“Lingnan teachers inspire me a lot more than just lectures,” said William with tons of gratitude towards his mentors.  The first person is Assistant Professor Chiu Wai-wai in the Department of Philosophy. “He is always supportive and encourages me not to give up whenever I face difficulties in my studies,” William expressed how Prof Chiu kept his chin up despite countercurrents.  While William thanked Prof Chiu for his spiritual support, he devoted his second token of thanks to Associate Professor Derek Clayton Baker in the Department of Philosophy for supervising his Final Year Project.  “Prof Baker is definitely a brilliant teacher who always gives valuable comments on my works, motivates me to challenge myself and inspires me on the importance of resilience as well as self-discipline,” William recalled how much he had grown up under Prof Baker’s guidance.  His gratitude also goes to Dr Chu Pok, Senior Lecturer in the Department of Political Science.  “Dr Chu always told us to ‘work smart’, which has become my motto on learning until now,” William said.

How to work smart? “Learning is most effective during the most productive period of the day,” William puts an emphasis on time management which allows him to best plant his precious seeds, the time.  “Besides, I read books that are neither too simple nor too complicated,” he added, explaining that too-complicated materials hinder understanding while too-simple ones contribute little to growth in knowledge.  “Learning how to learn enables me to utilise my time in the most efficient manner.”

William’s experience demonstrates how out-of-class activities contributes to whole-person excellence.  “Without prior experience, I hesitated to join the University Chinese Debate Team in the first place.  Joining was a bold decision for me,” William shared his memories in the Debate Team.  During his three years of active participation in the Debate Team, not only did he strive for victories with his fellow teammates but also grasped the skills conducive to his future endeavours.  “Debate has enhanced my analytical thinking and writing a lot, benefiting my philosophical learning as well as understanding of public affairs,” William was gratified by his courage to try, which brought him remarkable achievements today.

From joining the Debate Team to living in hostel, William exposed himself to a diverse social network.  “Together we cooked, we played games, we talked about careers and we discussed politics,” he looked back with nostalgia for amusements, encouragements and enlightenments that thrived lifelong friendships with his hall mates at Wu Jieh Yee Hall.  “Through inter-hall events such as annual dinners and sports tournaments, I developed into a sociable person, much different from who I was before stepping into Lingnan.”  As the only university in Hong Kong providing 4-year full residency for undergraduates, Lingnan aims to cultivate students’ social talents.

Starting from October, William will be pursuing a PhD degree in Politics and International Studies at University of Warwick in the UK.  Given his distinguished performance, he has earned a full scholarship to advance his research on political philosophy.  “Western concepts dominate the academia of political philosophy.  I hope to contribute more from the Chinese tradition and also enhance the public understanding of philosophy in Hong Kong,” William revealed his ambition.

“Lingnan is a place where everyone can develop his or her uniqueness,” said William, acknowledging his alma mater for transforming his life.