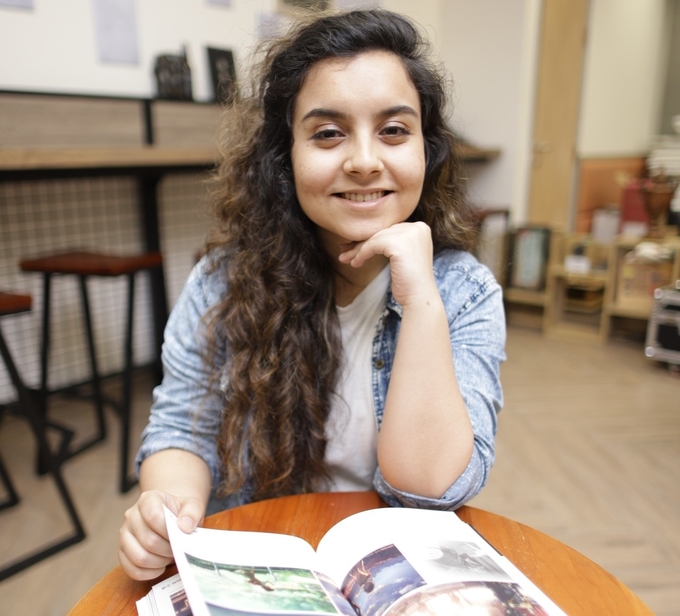 The winner of the Most Distinguished Student of the University Award 2018/19 is Mateena Hammad, a final-year political science student. She has been recognised for her outstanding academic performance plus her active involvement in raising awareness about minorities in the local community.

Originally from Islamabad, the capital of Pakistan, Hammad received the chance to pursue undergraduate studies in Hong Kong when she was awarded the University’s non-local student scholarship in 2015.

“Coming to Hong Kong was the first time I had been abroad; it was a huge change for me,” says the 21 year-old.

While in high school, she had hoped to study overseas, particularly when she heard that an older student at her school had gone to Lingnan through the scholarship programme in 2009.

“She did really well, and the principal then nominated me,” Hammad says. “I always planned to go into foreign relations and was interested in the whole Asia-Pacific area, so I thought this was just the perfect opportunity – and took it.”

However, encountering a completely new environment and culture was not easy at first.

“It was a lot more intense and overwhelming than I had expected,” she says. “It was the first time I lived away from home and in the beginning I was dumbfounded and didn’t know what to do.”

Food was the first big challenge for the then 17 year-old, since she doesn’t eat pork.

“Hong Kong food is delicious but a lot of dishes use pork. I’m a lazy person when it comes to cooking but, thankfully, being at Lingnan helped me take on more responsibility in that way.”

Initially, the westernised social life on campus was also a bit disconcerting.

“It really was something outside my comfort zone in the early days,” she says. “But I learned you could say no to drinking, but still have fun with your friends because they also want your company. There are, though, a lot of self-esteem issues related to that.”

In dealing with culture shock, what really helped was the support and love she found from the Student Services Centre and her fellow non-local students.

“They became my family and I never felt lonely or out of place,” says Hammad, who has also picked up a fair amount of Cantonese over the past four years.

Perhaps surprisingly, being a minority on campus and in the local society didn’t really bother her.

“It’s interesting that I already felt like a minority back in Pakistan, though not in terms of ethnicity,” she says.

“I was one of the very few people who were very interested in going abroad, and that automatically made me a bit different from my classmates in high school. So, coming here, the feeling was not that unfamiliar, though of course it was a completely new dynamic.”

Such personal experience meant Hammad was keen to increase general awareness of minority issues. For example, she has done volunteer work for the organisation Inter Cultural Education, giving talks in local secondary schools about equal opportunities and cultural diversity. She has also assisted a few equal-opportunity projects on campus.

“I don’t know if I have actually had a lot of practical impact, but I have definitely tried my best to tackle problems of miscommunication,” she says.

“I really tried to bridge that gap through my community service. That’s always been my focus.”

Growing up as a girl in an Islamic society, Hammad was always conscious of her own role and what might change.

“In Pakistan, even in a progressive capital like Islamabad, many people still hold some very conservative ideas, for instance that you have to keep girls indoors and that they are not allowed to go outside at night,” she says.

“All my life, I’ve been under almost constant surveillance.”

But thanks to her parents, who have a more liberal outlook, she found the courage to break free from restrictive norms and explore the world.

“My dad, who is a banker, is my biggest influence. I would say he is very into independence for women,” she says. “He told me that wearing jeans and a T-shirt, you could still be just as good on the inside as people wearing more socially accepted clothes. It’s all about your attitude. As long as you are a decent person, your clothes don’t define you.”

Hammad’s mother is a school principal and a role model she has always looked up to.

“She knows how to handle kids. She will discipline you in two seconds. But she is super soft inside and so wise.”

Of all the memorable moments during her time at Lingnan, the TEDx Talks event held on campus during her second year stands out.

“At the time, I’d been struggling with health issues, but the speech made by Bertha Chan, a body-positive activist and founder of the Curvasian platform, really inspired me. After listening to her, I decided that I had to stop feeling bad about myself, start to find my own future, and be more assertive about what I want.”

Along the way, the University’s multicultural environment was also an eye-opener, turning her into an internationally aware citizen.

“Before coming to Lingnan, I’d never really ‘internationalised’ myself by keeping track of pop culture, or what’s famous in today’s world, or what’s trending. But Lingnan has made me interested in what’s going on globally, in being internationally aware rather than just nationally aware.”

While there are many people to thank, Hammad is especially grateful to Mabel Mak, associate director of student services at the Student Services Centre.

“Mabel has been so amazing for us. Whenever I had even small problems that I wanted to share, she was always ready to help me out. One time I almost couldn’t go on an exchange because of some technical issues, but she stepped in to fix everything, so I have to thank her for all she’s done.”

Overall Hammad describes her experience at the University as humbling.

“It has turned out to be something I would never have imagined before I was nominated for the scholarship,” she says. “It’s good to know my efforts have made a positive impact, but at the same time, I know there’s so much more I could do or improve on.”

As a next step, she is planning to go on to further studies in the field of public policy.

“I have applied for MPhil programmes at different universities in Hong Kong, including Lingnan,” she says. “I’m not yet sure if this is my last year here; I’ll find out soon.”