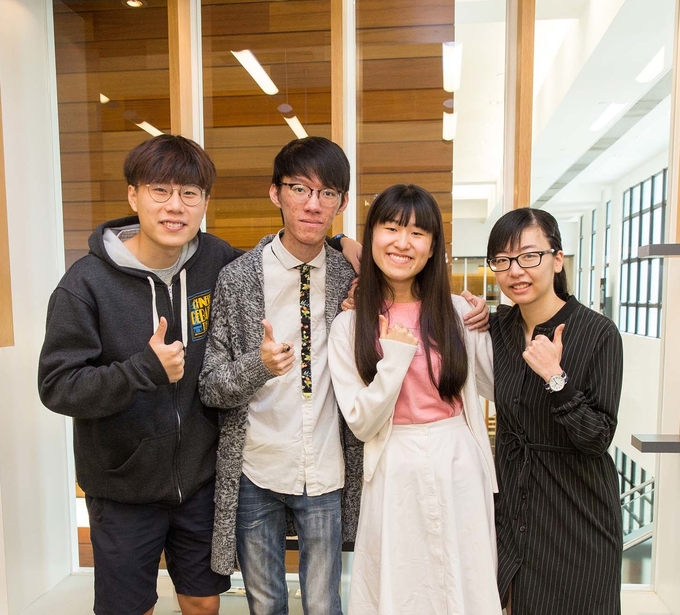 They spoke against the motion “The advantages outweigh the disadvantages of the #MeToo movement in promoting social justice”. According to the judges, it was a convincing win, with a special accolade for Anastasia Mak Wa-ki who was named overall Best Debater.

The win was the result of long hours of practice, which helped the individual team members speak eloquently, identify relevant points relating to social issues, argue a case from different perspectives, and approach things with a logical mindset. The four spoke afterwards about the experience and their secret of success.

How special is the Chinese debate team at Lingnan?

Tang: Some institutions arrange regular training sessions and a packed schedule, calling in former team members to help out with intense rehearsals and mock debates. What makes it special here is that we learn more by doing. Instead of training night and day, we practise and improve by taking part in actual contests. We then do a careful review of our performance to identify what we still need to work on.

How do you prepare for this particular competition?

Tang: Gathering useful information through background research is a prerequisite, and that is what took the most time. Given the limited resources available in Chinese, we had to look through reference materials written in English and in other languages as well. One of my tasks was to check cases in France, and I had to use an online translator to understand the French. One topic this year was disposable plastics and, for that, we read a 100-page report in English from the UN Environment Programme.

Chow: For something like that, we would make notes on various initiatives around the world, the opinions of different stakeholders, research by leading scholars, and recent academic reports. We would then compile a concise set of references for fellow team members to consult.

What is the key to success in a competition?

Tan: It all depends on how well you make use of the information you have collected. It is like putting together the pieces of a jigsaw puzzle, and a well-thought-out speech should present the whole picture. Some things may seem irrelevant to the motion, but can still be used as a metaphor. For example, a debater compared the speed of a car to a baby crawling across the floor, which made a big impression on the audience.

Mak: Good time management also counts for a lot. An argument works only if your explanation is precise enough. When choosing an argument you think is effective, you also have to consider the time needed to set it out clearly enough.

When the opponent had made a strong argument, how did your team turn the tables?

Tan: It is a common practice to anticipate arguments that the opponent is likely to put forward and to prepare responses in advance.

There are three techniques we often use. First, attack is the best form of defence. To regain the upper hand, we might raise another concern and request a direct response. Secondly, we try to clarify any ambiguity. Thirdly, we might acknowledge the other team’s perspective, but then speak from a modified position or take a more comprehensive viewpoint which goes further than they did. This minimises the force of any attack against us and, as techniques, they tend to get the attention of the judges.

Mak: In this competition, the opposing team argued that the #MeToo movement encourages victims to speak out about their suffering which, in turn, gives them the courage to heal. We agreed that support for victims can inspire courage, but we asked if the #MeToo has really been able to do this. We went on to give some real-life examples showing how people linked to the #MeToo movement had been criticised for exaggerating their cases, accused of lying, and generally insulted. None of this helped in healing their mental wounds.

What strengths must a good debater possess?

Tang: One of the first requirements is good critical thinking skills. You should also be patient and persistent in checking information. Online searches are convenient, but many of the articles which show up are of doubtful quality and value.

Mak: A good debater should always reflect on how to keep improving strengths and address weaknesses until he or she measures up.

Tan: As the captain, I foster teamwork. Each of us has unique strengths, and a good all-round team is one that makes full use of its different assets. We helped each other to form a comprehensive view of each case and to come up with strong, unbiased arguments that could prevail against our opponents.

What did you learn during the process?

Chow: There were times in a debate when I had to make an argument that didn’t really fit with my own opinions. But that taught me about the need to listen to opposing voices, to figure out the rights and needs of different individuals, and to interpret reality from various angles.

Tang: Along the way, the team had a few quarrels, but that led to greater solidarity. We learned to appreciate criticism and respect one other.

Tan: I realised that there is no absolute yes or no in some controversies. It all depends on the position you have chosen to take. You see that today in many disputes about social issues.

How has success with the debate team inspired you?

Mak: In the movie The Grandmaster there is a famous quote about being, knowing, doing. We debate to be logical, to be someone who addresses facts and truths. We want to know how the world works and see things from different perspectives. And we do it to understand social issues and hopefully resolve them for the betterment of society.

Co-organised by RTHK and The Hong Kong Federation of Students, the Inter-collegiate Debate Competition aims to inspire young people to care about the society they live in.