Karate athlete Eva Lam: ‘Through trial and error, everyone can be a trailblazer!’ 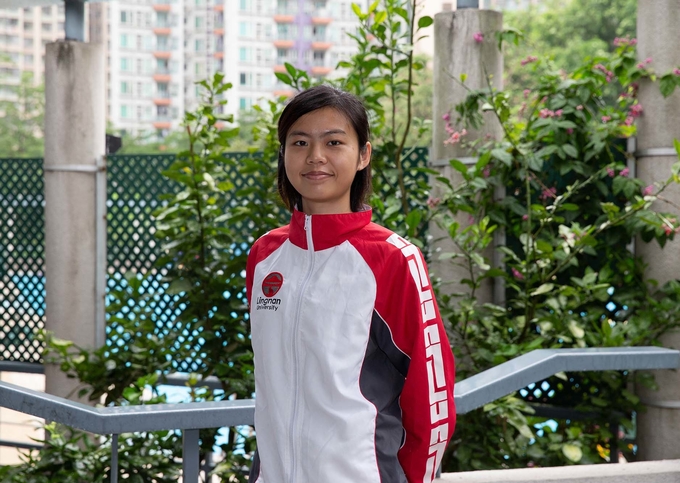 At the end of the academic year, some graduates look for a job while others pursue further studies. Final year student Eva Lam Man-chi from Cultural Studies has made up her mind to follow her athlete dream.

A member of the karate team at Lingnan, Lam was a Hong Kong delegate to the 1st Asian University Karate Championship 2019 in Macau, and the 2nd runner-up in the Women’s -61kg Kumite event.

Why has Lam chosen karate? Her story starts in 2015 at the University’s New Student Orientation.

“That’s where I first watched a karate performance and realised how cool karate is. Given my hope to play a new sport and see how far I could go, I decided to join the karate team,” says Lam.

She had been a volleyball player, so now she changed the target from a ball to real humans.

“In a kumite (組手) action of karate, you have to battle with an opponent on your own, which is different from ball games and team sports like volleyball.”

In society, women are often portrayed as soft and weak. Lam, however, has never felt inferior to boys as an athlete, despite the genetic difference in physical stamina.

“Gender is no different in sport. Physical stamina may be an innate asset to boys because of their muscular build. Yet the trick in karate includes flexibility, which girls seem more able to master and to perform the fine manoeuvres,” she says.

Social stereotypes dictate that ladies follow etiquette norms, that punches and kicks are not appropriate for girls.

“So are those who learn the martial arts troublemakers who enjoy stirring up fights? Obviously not. Out of uniform, we are as polite and gentle as anyone else. My father sometimes grumbles at me for ‘not being ladylike enough’, but still always supports what I want to do. I am happy to see my family and friends come to cheer for me at events.”

Every martial art has its own house rules. “To protect opponents, we karate players cannot use elbows or knees, nor attack below the belt or it’s a foul play,” she says.

“In addition to a greeting, ‘osu’ portrays the karate spirit: to dedicate your whole self, to respect and believe in the teacher, and to concentrate. We act on and comply with whatever our teachers say. ‘Osu’ means endurance too — to endure attacks and never let emotions overpower our minds. Good karate athletes always stay calm for the next steps,” Lam explains, “Believe in yourself and your teacher.”

Lam’s mentor has always been by her side, ever since she first took up karate.

“My karate master is far from just a teacher. He is more like a father to me, as well as a lifetime enlightenment. Once I had to rise above acute pain from an injury and keep going for a screening process. After listening to my complaint, he said to me, ‘If you can talk then you can fight!’

“Martial arts are a way to express yourself, similar to speaking. Both depend on diligence and the efforts that you have made. You do well in oral exams because you try to think and talk, and you master karate by practising and improving. Pain is never an excuse.”

Every failure teaches something. Four years ago when Lam first took part in a competition, she had already suffered her first ever disqualification penalty.

“I was still a freshman at that time. In the match for the third place, I scored, but my opponent’s nose was bleeding due to my heavy punch. Whenever a contestant gets hurt, the competition is suspended until he or she recovers. Apparently I hit too hard and my opponent kept on bleeding, so I was then subject to a foul penalty.

“It was disappointing, but giving up is never an option for me. Your punch reflects how well you can coordinate your limbs. Flexibility determines the ability to control your fist power. That’s what we call sundome (寸止) in karate — every attack should be good enough to score but not harm, especially the head,” says Lam.

Karate equips her not only with a martial art but also with self-assurance.

“I was a bit of a coward in the past, but my karate master always says ‘fight the fear’. Karate is all about resistance. The more nervous you are, the easier it is for an opponent to strike back. All you can do is to fight on.”

Lam proves that girls are not inferior to boys in their determination to change and make a breakthrough.

“In early days at Lingnan, I was told to ‘unlearn what you have learned’. Gossip is everywhere, but here Cultural Studies trains our impressionable minds to discover the wrong and reveal the right. We learn to correct misunderstandings with words.

“Don’t let stereotypes confine you. Failure gives you new knowledge to refine into creating a better self. Through trial and error, everyone can be a trailblazer,” she says.