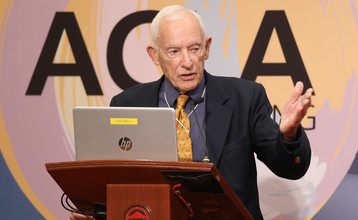 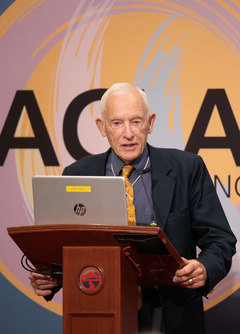 The world is changing quickly, and higher education must adapt to new global challenges, said Deane Neubauer, Professor of Political Science at the University of Hawaii, and an Adjunct Senior Fellow of the East-West Center, in his keynote speech at the CHER/ACLA conference, which took place 8 November to 10 November at Lingnan University in Hong Kong.

Prof Neubauer’s presentation “Engaging the Forces Propelling the Repurposing of Higher Education” discussed how Artificial Intelligence (AI) and the Fourth Industrial Revolution, climate change, resurgent nationalism, and population dynamics will affect the future of higher education. Prof Neubauer concluded that even if the new challenges that higher education faces are met, the organisational structures of the universities of the future will be significantly different to those of today.

Prof Neubauer said that what has been called the Fourth Industrial Revolution – the changes that are being brought about in the workplace due to the deployment of AI and automation – is a fundamentally new structure which will have a broad range of effects on society. “What are the moral and ethical dimensions of AI? When one tries to explore the ethical implications of robotics, AI, autonomous vehicles, nanotechnology, quantum computing, and so on, one realises that the social change that will result is significant,” Prof Neubauer said.

Who will work, and what kind of work will be available in the future, is currently unknown, as is the human worker’s future relationship with robots and with AI. Will human labour be necessary at all? There is also the possibility of a massive re-entry of individuals into higher education as a result of societal and vocational changes caused by the Fourth Industrial Revolution. Moreover, if there is no work for humans, what subjects will they need to learn? Higher education must be ready to adapt itself to the challenges raised by such issues and events, Prof Neubauer said.

Climate change is affecting everybody, and Prof Neubauer wondered what universities are doing about it, and what they should be doing about it. “If you have a child who’s starting education this year, better buy her a raincoat, as by the time she graduates [significant] climate change will be here,” he said, noting that Hawaii, where he lives and works, is on the front line of climate change, as it is surrounded by water. Climate change may have direct implications for university funding, he noted. States are already gearing up to cope with the changes that will occur due to climate change, and money used to mitigate its effects could lead to shrinking budgets for higher education in both the public and private spheres, he said.

The rise of nationalism and the arrival of nationalistic governments around the globe is already posing challenges for higher education, Prof Neubauer said. Nationalism has affected international alignment, and he noted that seven countries that had their migration privileges into the US rescinded by the Trump administration [Iraq, Syria, Iran, Libya, Somalia, Sudan and Yemen].  Prof Neubauer said that after this occurred, he was shocked to discover that some international students who were not from those seven countries would not be allowed back into the US if they left, even though they held student visas.

Nationalism has also affected government budgets concerned with education. In many Republican states in the US, the state budgets concerned with international education have been in decline since the Trump administration took office. In its extreme form, nationalism creates a censorious national context in which a disfavoured nation is subjected to negative national propaganda, Prof Neubauer said.

Prof Neubauer noted that the traditional model for higher education focusses on teaching a student to become an engaged and informed citizen of the world. But the globalisation of education and collaborative research may need to be reassessed in the era of travel bans. Nationalism is undermining the idea of colleges and universities as spaces for international collaboration. “Everything is being affected by the degree that nationalism pulls away from the international context,” he said.

The other modality that will affect higher education in the next two decades is population dynamics and the rapid growth of regions like Africa, Prof Neubauer said. By 2025, two thirds of Africa’s population will be under 25. Meanwhile, there will be significant ageing in other parts of the world. What are the implications of this development for higher education?

Higher education is conservative, and changes occur very slowly within it. But the world is changing very quickly, so something will have to give, Prof Neubauer concluded. “The organisational structure of the contemporary university as we have grown to accept it over the last several years cannot sustain itself, and we will face a major challenge,” he said.