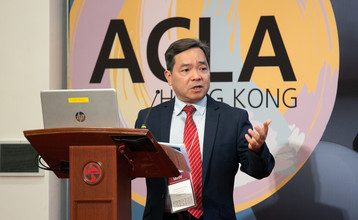 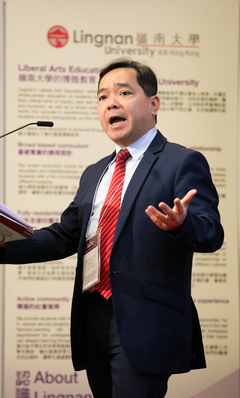 Institutions offering a Liberal Arts education should consider the fine balance between preparing students for the labour market and enabling their whole-person development, said Joshua Mok Ka-ho, Vice President, Lingnan University, at a featured speech at the CHER/ACLA conference. While a major focus of educational institutions in Asia is to secure a high position in the university ranking systems to enable them to compete with universities in the West, this aim should not eclipse other aspects of education, such as the personal development of students, he said.

What’s more, too great a focus on university rankings can produce inequalities among students, among teachers, and between universities. It can even lead to a more unequal society, Prof Mok said in a speech entitled “Questing for Sustainable Development in Higher Education: The Role of Liberal Arts Education”. The CHER/ACLA conference took place 8 November to 10 November at Lingnan University in Hong Kong.

Although many universities in Asia are aiming to become “world-class universities” it is difficult to find a precise definition of this term, Prof Mok said. What exactly does it mean to be a “world-class university?” In spite of the lack of useful criteria, all universities in Asia are affected by the notion of “world class” and those involved in university management are forced to address the issue every day. “Many university presidents in Asia says that have no choice -- they have to pay attention to the rankings,” Prof Mok said.

The situation extends outside the campus to governments. Governments wish to have some universities that can compete with established universities in the West, so they focus their resources on a select few universities that they consider to have the potential to become “world class”, he said.

The regional trend is towards the commodification and commercialisation of higher education, even though many are unhappy about applying such systems to universities. Governments wish to make sure their universities are globally competitive, but they are restrained by the available resources. So governments must choose some institutions to groom and fund, while leaving the rest to rely on non-governmental funding. Some universities are favoured by governments who want them to compete globally, and this leads to a divide, Prof Mok said.

Marketisation and privatisation have led to a pattern of allocating resources which has resulted in a stratification of universities, he continued. This stratification has created different classes of students and graduates. If a student is lucky enough to achieve a place at a so-called “world-class” university which is funded by the government, his or her career prospects may be greater than those of a student who attends a different kind of university. We are not only facing inequality in society, we are also facing it in the university sector, Prof Mok said.

Discussing the role of education in the 21st century, Prof Mok said that institutions should encourage their students to support sustainable development. Citing climate change, students should be taught how to think about ensuring a sustainable future for the planet. “How can we integrate this important topic into the curriculum and into our learning experience, and how can we integrate it into the learning experience of students who are not majoring in environmental issues or geography? Do we have the resources to educate all our students about sustainability?” Prof Mok said, noting that Lingnan University is committing resources to achieve this goal. For students to become good leaders, they must become caring leaders, and sustainability is an important issue for them to care about, Prof Mok said.

A Liberal Arts education should do more than equip students for the labour market, although this is an important consideration, said Prof Mok.  Education should also nurture critical and caring minds in students, and give them the ability to perform well on a global level. Prof Mok said that the employer feedback Lingnan received praised “soft” skills like language ability, an international outlook, and the ability to work as part of a team over hard knowledge. The employers of the future will be looking for generic skills that can translate to many different areas, Prof Mok noted.

“We must give our students regional and international perspectives, a broad-based education, caring minds, and the professional skills to handle increasingly complex problems and issues,” said Prof Mok. “Beyond the economic experience, we make our students at Lingnan human. We believe in excellence with a soul. Our students have professional skills, they have integrity, and they make their decisions after taking ethical considerations into account,” he said.