CHER 2022 highlights the benefits of collaboration 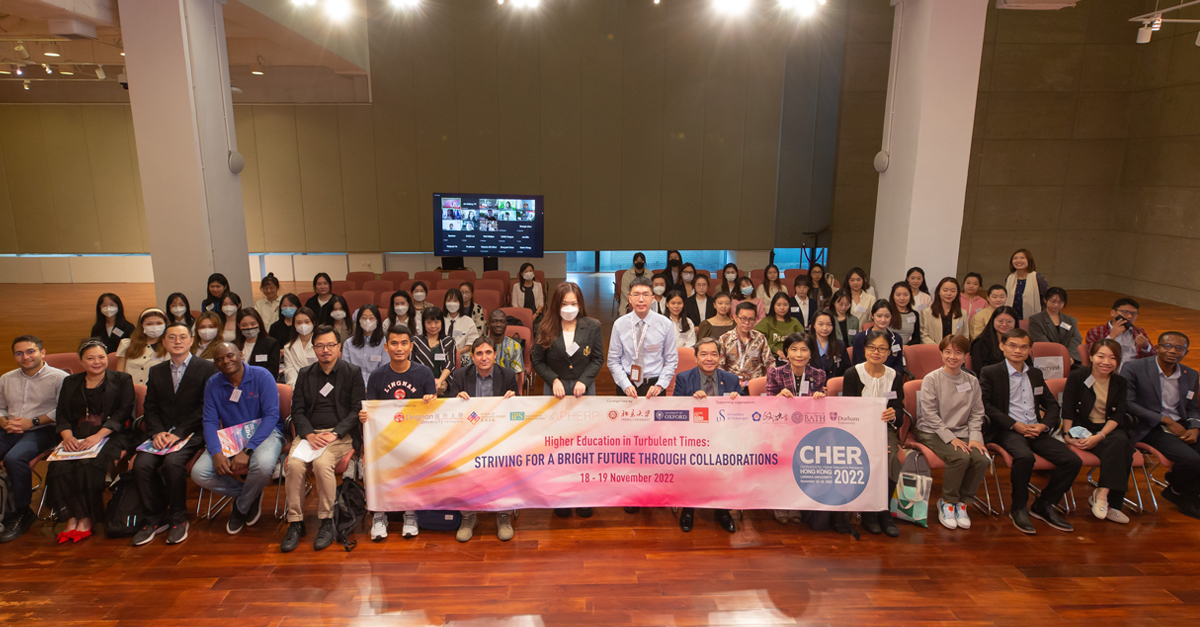 In common with other sectors, higher education felt the impact of COVID-19 and is now in the process of assessing the lasting effects of the pandemic on teaching methods, academic exchanges, student life and much else that is central to the academic community.

There is a lot to contemplate, not least that while “going online” made it possible to continue classes, lectures, tutorials and productive exchanges in a virtual environment, the switch to greater reliance on technology also threw up questions relating to inequality of access, opportunity and standards.

Against that background, the Conference for Higher Education Research (CHER) - Hong Kong 2022, which took place on 18 and 19 November, was a chance to examine many of the most pressing issues.

A unifying theme running through the keynote speeches and panel sessions was that, in the current “turbulent times”, tertiary institutions around the world have to contend with all kinds of unfamiliar problems. Some of these have a nationalist or protectionist dimension, perhaps linked to geopolitical tensions. Others result more directly from the way the pandemic restricted mobility for scholars and students, interrupting exchange programmes and generally slowing progress.

One major task, therefore, is to resume previous levels of international collaboration, with the aim of creating a brighter future where it is possible to tackle existing difficulties, develop innovative courses, support scientific research, and contribute more to society at large.

To that end, the conference attracted notable speakers from Canada, India, Italy, the Netherlands, the United Kingdom, Romania, Malaysia, Thailand, mainland China, Hong Kong and Taiwan, and had around 120 participants joining on-site at the Lingnan University campus and online.

In his opening remarks, Lingnan’s vice-president Professor Joshua Ka-ho Mok noted that wisdom and innovation are both core to the business of higher education. However, human history has also taught us that whenever we encounter difficulties, the best way forward is to work together in collaboration.

“The world has become so complex, it requires us to work across boundaries, across disciplines to find better solutions,” said Mok, pointing to the recent gatherings of APEC, ASEAN members and the G20 countries as an example of what’s needed.

For academic institutions, the question now is whether to go back to the so-called norms of the pre-pandemic era, as happened after previous crises, or to fully embrace the methods and practices implemented of necessity during the past three years. One way or another, the decisions taken will have implications for teaching, learning, academic standards, collaboration and emerging research.

Focusing on diverse aspects of the challenge, three keynote speakers shared their views and insights with the conference audience.

Professor Angela Yung-chi Hou of National Chengchi University in Taiwan spoke about virtual quality assurance in higher education during the pandemic, a subject which has prompted much comment and where many students feel they have missed out.

The topic presented by Professor Ruth Hayhoe of Canada’s Ontario Institute for Studies in Education dealt with the “dialogue among civilizations” in the context of further education, something which has special relevance at a time of heightened tensions between the major powers and the prospect of detrimental knock-on effects.

A particular example was highlighted by Professor Wenqin Shen of Peking University who spoke about the changing landscape for Chinese college graduates who choose to study abroad. The basis of this talk was a “mixed-methods longitudinal study” conducted between 2019 and 2022, which shows how patterns are changing and seeks to interpret the causes.

Providing a forum for a wide range of viewpoints and perspectives, the conference also included lively panel sessions on themes ranging from the development of teachers to human well-being.

A roundtable discussion on the role of arts and humanities in higher education, in addition, was a chance to reflect critically not just on Lingnan’s own experience, but also on how this type of learning can be put to good in building resilient, greener economies in the years ahead.

In his introductory remarks, Professor Mok noted that it is important to share research findings. With that in mind, the audience was also alerted to the launch of two new books of immediate interest and relevance.

One is Higher Education, Innovation and Entrepreneurship from Comparative Perspectives: Reengineering China through the Greater Bay Economy and Development (Singapore: Springer, 2022). It is a volume containing academic papers from a number of authors and is already available.

The other is Globalizing China: Social and Governance Reforms (London: Routledge, 2023), written by Professor Mok, soon to be published, and based on research undertaken in different parts of China.

“The specific focus is looking into how the Chinese government has tried to learn globally by finding good practices elsewhere to enhance local reform, especially in the delivery of social services,” he said, “It is a timely project because one of the key areas of future development for the country is how to promote efficient, effective and people-oriented local governance.”