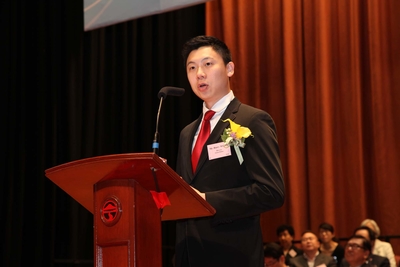 No one could have imagined a Form 5 graduate scoring 11 marks in the Hong Kong Certificate of Education Examination would eventually become an entrepreneur and a significant shareholder of Guru Online, a digital marketing services company listed in Hong Kong. Thirteen years after graduation, alumni Harry Wong attributes his success to Lingnan's all-round education.

"I was determined to go to Lingnan since Form 5. I yearned for hall life and knew that I would have more opportunities at Lingnan than at other universities," Harry shared. As an active marketing major, he grasped all the opportunities to develop into a versatile person through joining activities such as the Young Leadership Development Programme, AIA Leadership Training Programme, Chinese Debate Team and English Debate Team, to name but a few. "I didn't perform well in the Chinese Debate Team, yet I treasured the opportunity to brush up my presentation skills, which proved to be a valuable asset in my career development," he said. By the time he graduated, he was so well-equipped that he secured a well- paid PR job at a property developer.

Yet, it has not been all smooth running. Just as Harry felt settled in with his PR job, the company announced a drastic change of employment terms. He had no choice but resigned, four months after joining. Feeling lost and frustrated, he went back to his alma mater and sought advice from his best friends. Knowing his talents, they encouraged him to set up his own company, and that became the turning point of his life. With extraordinary courage and acumen, he started a business trading MP3 devices. Within five years, the scope of business expanded to other products and Harry began to enjoy the fruits of his labour. In 2010, seeing the potential of AdBeyond (Group) Limited, a digital marketing services company, he invested HK$2 million into it. It was subsequently listed on the stock market in 2015 as Guru Online (Holdings) Limited.

"Never stop learning," Harry recalled his university life when he read six newspapers every day and joined more than 50 conferences and seminars in a semester. "I read widely and joined different activities not because I needed to fulfill academic requirements but because I wanted to be a better person."