From revenge to reconciliation: a new way to justice in post-conflict societies 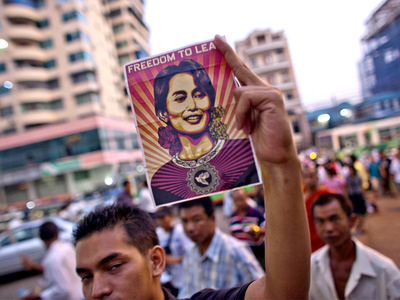 When authoritarian regimes collapse, one of the greatest questions faced by the governments that succeed them is how to achieve justice for those who may have suffered under the previous system.

Does one take revenge on those who perpetrated human rights abuses? Or have them seek forgiveness and opportunity for redemption within the new system?

These and other questions have been a major theme for countries such as Poland, the former Czechoslovakia, South Africa, Rwanda, Cambodia and, most recently, Myanmar, where the military junta ceded power following elections in 2010.

A fascination with transitional justice

How societies reconcile the past with the present is an issue of particular interest for Prof Roman David in the Department of Sociology and Social Policy, who specialises in a field known as transitional justice.

Transitional justice has been defined by The International Center for Transitional Justice as "not a 'special' kind of justice, but an approach to achieving justice in times of transition from conflict and/ or state repression." Prof David elaborates on this by saying "it is an emerging area of study that is very interdisciplinary in several aspects, spanning sociology, political science, law, psychology and development studies."

He also mentioned that he has a personal interest in the field because he was born in the Czech Republic, a country that was not democratic, and experienced first-hand the process of transition from an authoritarian state to a democracy.

What's more, unlike traditional social and political scientists, academics who specialises in transitional justice examine values such as truth and forgiveness, both of which were phased out from social science inquiry decades ago. Forgiveness, for example, was not properly studied because of its religious connotations. As Prof David points out, "transitional justice is a socio-political psychological process that deserves more attention because we want to make peace in post-conflict settings."

Another difference in the study of transitional justice is its focus on what Prof David terms "personnel systems", or how a new government selects officials for administrative or judicial positions. Traditional political scientists, on the other hand, primarily examine the behaviour of voters and political parties.

According to Prof David, the basis on which new officials are selected can be inclusive, exclusive or reconciliatory. Most of the time, he says, the change in personnel is done through dismissals   — an

exclusionary process under which people associated with a former regime are dismissed. But this is not the only option. Under a reconciliatory approach, if an individual confesses to past mistakes then he or she may be allowed to hold a public position again.

"This process originated in Poland, where people were given a second chance in exchange for their revelations about the past," says Prof David. "The truth about the past emanates from the individual who confesses. The collaboration itself is thus not an obstacle to holding public office. But if he says that he didn't collaborate with the secret police, for example, and there is evidence against him, then a judicial process is launched, and he is disqualified. Instead of punishing past sins, the Poles are more intolerant of present dishonesty."

The reconciliatory approach can enable a newly-democratic country to begin the process of healing. Under the exclusionary approach, however, continuing conflicts within society can lead to disasters as in countries such as Iraq or Libya, which today are essentially failed and ungovernable states.

Prof David says that the current focus of his research, Myanmar, is attractive for several reasons. "First, there is a certain sentimental value in studying the country. Myanmar is a country that once had a promising future. Its post-war economic indicators were comparable to Korea. When we compare Myanmar and Korea, we can see the enormous devastation caused by Myanmar's military junta. But we can also see that the country could return to its deserved position in Asia."

He also points out that Myanmar is a laboratory of social and political development, where the issues of ethnic conflict, justice, tolerance, reconciliation and democratisation can be effectively studied.

"The iconic prodemocracy leader Aung San Suu Kyi is another reason for my attraction," he says. "In spite of her problems in relation to ethnic minorities — which she will have opportunities to rectify soon — she

belongs to the same league of world leaders as Nelson Mandela and Vaclav Havel. Havel actually played an important role in her nomination for the Nobel Peace Prize."

An interest in people

Joining Lingnan University since 2012, Prof David says he will continue to examine the concept and implementation of transitional justice throughout the world.

In addition to his new publication, Limited Liberalism and Democratization in Myanmar, co-authored with Prof Ian Holliday, he is interested in studying Korea and how it is reconciling its past under Japanese occupation and the authoritarian governments that followed it after World War II.

He also attends conferences and takes on consultancy work in countries such as Ukraine, where he has been working on a project aimed at reforming the state administration and judiciary.

Although his research takes him far afield, his main interest is not so much on how transitional justice is applied at the state level but among people. "Injustice is not an abstract concept, it has many faces," he says. "My interest is in people, their views and judgements rather than focusing on countries."