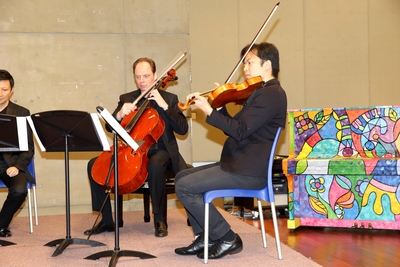 The arts gala "Lingnan Arts Festival 2016" held from 2 to 30 March featured a rich array of musical and cultural events on campus and provided an opportunity for staff and students as well as the public to experience the unique liberal arts atmosphere at Lingnan.

Organised by the Faculty of Arts, this year's Lingnan Arts Festival began with the goriest of Shakespearean's plays – Titus Andronicus 2.0, performed by the Tang Shu-wing Theatre Studio. It hailed as one of the most significant events of Hong Kong contemporary theatre since its first run in 2009 and has been taken on tour to six cities in Europe and Asia. Director Tang Shu-wing took an audacious and ground-breaking approach in presenting the revenge classic of the Roman General Titus by story-telling in physical theatre with live music and body movement. Another highlight of the festival was the "Peking and Kun Opera Appreciation" performed by Jingkun Theatre. Following a performance of the episodes from the Tale of the White Snake and The Outcast General by young actors of Jingkun Theatre, Artistic Director Ms Tang Yuen- ha and Director Geng Tianyuan introduced the background and unique features of Jing Kun opera.

Concerts are always an integral part of the Arts Festival. This year, there were two Concerts@Lingnan performed by RTHK String Quartet and the Hong Kong Bach Chamber Choir. Apart from the wonderful performances, a series of workshops and seminars were organised by the Artist-in-Residence Ms Mary Stephen, and Writers-in-Residence Ms Collier Nogues and Mr Chan Koonchung.

Teaching, care and growth－an interview with Prof Lau Yin-ping of Department of Chinese