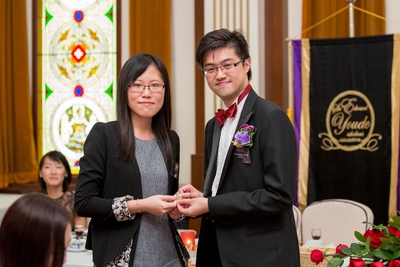 While many cannot envisage their career interests until graduation, Year 4 Social Sciences student Jenny Lam is resolute in her pursuit of becoming a public policy researcher.

Her deep aspirations and acclaimed performance recently earned her one of the most prestigious scholarships – Sir Edward Youde Memorial Scholarship, adding to the list of other prestigious scholarships she received in the previous years, including the Jockey Club Scholarship which provides her tuition & hostel fees and living allowances for four years, and the HSBC Overseas Scholarship which supported her a one-year study at the London School of Economics in 2014/15.

"Good research is the foundation of good public policy, while good policy is one of the necessary conditions to good social environment and harmony," a conviction that drove Jenny to becoming a policy researcher. At Lingnan, she learned to dissect problems with multiple perspectives and make fair judgements based on evidence. While Hong Kong people vented their anger on the Mainlanders for tapping Hong Kong's medical and educational resources, Jenny saw it a result of Hong Kong government's failure to predict the long-term impact of "doubly non-permanent resident children".

Despite her goal of becoming an academic, Jenny is not prepared to live in an ivory tower. She has been an active Service-Learning participant, contributing her knowledge to helping the underprivileged. With special interest in social gerontology, she joined a Service-Learning course called "Smartphone Class" in which Lingnan students taught the socially inactive elderly how to use smartphones and examined various gerontological theories such as role theory and activity theory. "The Service-Learning experience helped me understand the strength and limitations of those theories," she said.