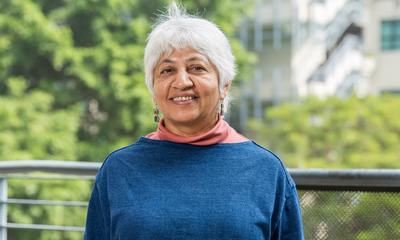 The new head of the Department of Cultural Studies sinceAugust this year, Prof Tejaswini Niranjana is a woman of many talents. She is a teacher, author, researcher, a multilingual academic conversant in five languages, and even a singer specialising in Indian classical music.

With all of her abilities and an academic career that has taken her from her native India to many countries across the globe, why did she choose Hong Kong and Lingnan University to put down roots?

She has also been working across the Asian network of the Inter-Asia Cultural Studies Society for more than 15 years, and she thought managing its work would be easier from Hong Kong than it was from India.

As for her choice of Lingnan, this was a matter of renewing a connection that began when she founded a research centre in India, the Centre for the Study of Culture and Society. At that time (the late 1990s), the Centre was the only cultural studies institution in the region aside from Lingnan. “We knew Lingnan well,” she says. By the time the Centre closed in 2014 due to a lack of funding, she was already working at Lingnan as a Distinguished Adjunct Professor of Humanities, so the transition was an easy one.

At Lingnan, Prof Tejaswini Niranjana is teaching two undergraduate courses — Gender and Cultural Politics, and Digital Cultural Studies — as well as running all of the associated tutorials. Although she had taught undergraduates before, her teaching duties in India had been primarily at the graduate level.

“At the Centre for the Study of Culture and Society we had a curated PhD programme of maybe five or six students a year. To go from that to teaching undergraduate students, I thought would be the biggest hurdle, but actually it’s fine. I’m quite enjoying myself.”

She particularly enjoys dealing with the young undergraduate students at Lingnan. “I like talking to people who are just beginning to figure out what to do with their lives and are at the cusp of many things happening in Hong Kong today."

In her Gender and Cultural Politics course, there are around 36 students, including exchange students from three or four different countries. The other course she teaches, Digital Cultural Studies, has a much smaller enrolment as Prof Niranjana feels students do not yet recognise the application of digital technology in the academic world.

The idea behind the latter course, which Prof Niranjana developed herself, is that one can learn how to think by building a website and making use of categories. “For example, if you are building a site about the topic of work, you have to ask what kind of work and how it is classified by age or gender, then use that as a way to think critically."

Another duty that comes with her role is the day-today running of the department. Although she feels it is manageable, especially compared with some of the big educational institutes in India, she is highly appreciative of her administrative staff, who she feels provide excellent support.

Future direction for the department

Although she has only been with Lingnan for a few months, Prof Niranjana is already considering where to take the department in the years ahead. First up, though, is filling two imminent staff vacancies — something she did not expect she would have to do on her arrival. “We are looking for people who are connected with the region in some way and who have involvements with it, as well as being excellent at teaching and research.

"We want people who can show some knowledge of the region, are capable of doing comparative work, know more than one language and are doing interesting work in the field. They will be assets to the department.”

She is also looking for opportunities to collaborate with other academic institutions within Hong Kong, such as with the Academy for Performing Arts where the former head of the department, Prof Li Siu-leung, is currently the dean of the School of Chinese Opera.

One possibility would be to offer a co-degree focused o Hong Kong but capable of being extended into a regional degree. She would also like to widen the scope of the Department’s PhD programme. Beyond this, she is keen to expand the research being conducted at the university, as this has been the focus of most of her professional life.  “I believe you cannot fertilise teaching unless you have a good research platform,” she says. “You can’t have teachers who are only teachers, and you can’t have researchers who don’t do anything but research. The philosophy of the institution I built in India was you could make a connection between the most elementary teaching and the most advanced research, which is the only way you can produce meaningful knowledge.”

A passion for music and learning

In addition to her strictly academic pursuits, Prof Niranjana has some ambitious goals of her own. One of these is a book, Musicophilia in Mumbai, inspired by the best-seller of the late British neurologist, Dr Oliver Sacks. Through this book, she is exploring the public passion for Indian classical music that developed in 19th century Mumbai, where gramophone manufacturers from Europe came to make some of the world’s earliest recordings. Many people got their first exposure to classical music through these recordings, she says, and this led to the formation of the first music schools in the city. Devoting time to this project on weekends, she hopes to finish the book by the middle of next year.

Prof Niranjana is also interested in carrying out a comparative project on music learning practices in Mumbai, Shanghai and Hong Kong. A singer herself, she is interested in how people who are not from musical families learn and develop an obsession for music. This, she says, tells us a lot about pedagogy and the way the present is connected to earlier traditions that have disappeared or become invisible.