Seeking justice for all 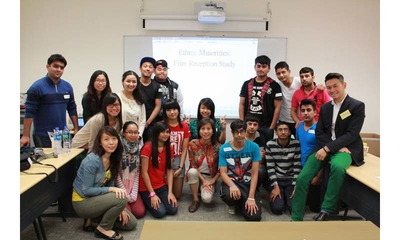 With a life-long passion for social justice, Prof Lisa Leung of the Department of Cultural Studies is actively involved in the advocacy work hoping to create positive social impact.

Since she was young, Prof Lisa Leung has been concerned about issues of social justice and poverty. Today, as an Associate Professor in the Department of Cultural Studies, she is working hard to tackle these issues so as to achieve her aspirations.

Prof Leung is a professional journalist; she received her PhD in media studies at the University of Sussex in the UK. Shortly after the handover, she returned to Hong Kong and then joined Lingnan in 1998. At first, her academic interests were mainly in media ethics and censorship as well as the ways in which media shapes our perceptions towards foreign cultures, specifically Korean popular culture.

Being a chair of the Justice and Peace Commission of the Hong Kong Catholic Diocese in the past, she also has a great interest in the human rights of the minority. “I reached a point where I felt I should bring this issue into my academic work and devote myself to this line of research,” she says.

She is getting more concerned with the plight of the South Asian minorities, Indians, Pakistanis and Nepalese, who face many challenges in Hong Kong such as lack of education, poverty and discrimination in the labour market. Without a good command of Cantonese, the South Asians in Hong Kong often find it difficult to navigate the bureaucracy and receive the services they need. “Hong Kong is seen as being culturally homogenous, which is sometimes given as an excuse for excluding the ethnic minority groups. The systematic social, cultural and economic marginalisation of the ethnic minorities is structural, even though many South Asians have lived here for generations.”

Prof Leung believes that conducting research is an important way of intervening into the matter and helping the South Asian community. It can also be deployed as a tool for raising social awareness and redressing the imbalances.

In 2009 Prof Leung obtained a General Research Fund grant from the University Grants Committee to carry out her first research in this area. This eventually resulted in the book project, Understanding South Asian Minorities in Hong Kong, with Prof John N Erni of Hong Kong Baptist University, which is about how South Asian people are taken as “invisible minorities” in Hong Kong.

More recently, Prof Leung has been focusing on a Knowledge Transfer Project Fund (KPF) project that aims to study the lives of South Asians in Tuen Mun. She was surprised how under-represented this issue is in academic research.

As to her KPF project, students will interview some South Asian families in Tuen Mun and create digital stories of the interviewees. Five or six students will also make a documentary in collaboration with Yan Oi Tong, an NGO, about the lives of Pakistani women in Tuen Mun. In addition to the video, they will publish a manual teaching South Asians to read medicine labels and instructions.

The videos will bring the stories of South Asians to life and be used for stimulating discussions in seminars. It will also be posted on YouTube for general viewing.

“It’s important to acknowledge the contributions of South Asians and enrich their understanding of the histories of the settlement of South Asians in Hong Kong,” Prof Leung adds.

Out of the ivory tower

Pursuing this line of research, says Prof Leung, is not just for tackling issues at the policy level. “The studies that I have been doing are community-based,” she says. “It’s about social justice; I hope that by using these studies as a form of intervention, I could bring more advocacy work to the town and inform my teaching.

“I truly believe that research, teaching and community engagement are tied in with one another,” she adds.

Prof Leung also felt that the society has become more divided, so it is all the more important to instil the value of diversity by engaging the community.

“To have more critical reflection of the issues we are dealing with, we must learn through action. We have to get into the community, we have to intervene directly, and we have to take responsibility – that’s what community engagement should mean for academia. Research and community are inseparable.”