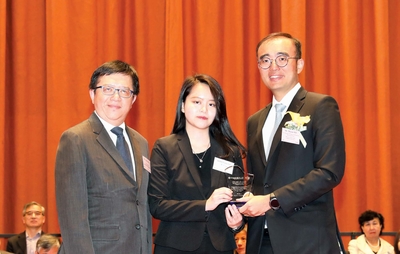 Lingnan University’s Awards Presentation Ceremony 2018 was held on 9 April in which a total of 508 awards and scholarships totaling over HK$13 million were presented to over 350 students in recognition of their outstanding academic and personal achievements. Mr Mason Wu Shang-tun, Court member and Honorary Fellow of Lingnan University was invited as the Guest of Honour of the Ceremony.

In his speech, Mr Mason Wu extended his sincere congratulations to all the scholarship recipients on their outstanding academic achievements and personal development.  He pointed out that Lingnan University offers not only a form of whole-person education emphasising academic studies, but also a form of training that helps develop a capacity for critical inquiry, a broad understanding of the world as well as care and contribution to the society.

In his welcoming remarks, President Leonard K Cheng thanked all donors for their unfailing support to Lingnan.  “Their generous donations to Lingnan over the years have helped us achieve our vision and mission, and more importantly have demonstrated their support of our educational philosophy,” he said.  President Cheng pointed out that award recipients at the Ceremony will become future leaders and innovators, not only for Hong Kong, but also for the world.