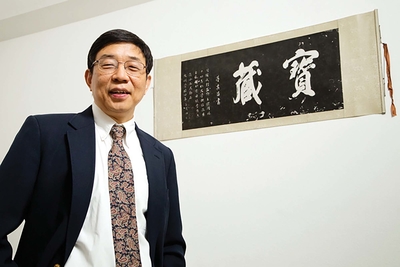 “I have long had a dream, to tear down the walls between the so-called traditional Chinese learning (guoxue) and Western Sinologym (Hanxue), towards a scholarship that embraces China’s full cultural heritage in and beyond its borders. Now I have an even greater dream, to cross the cultural oceans that seem to divide Chinese and Western literary studies,” said Prof Cai Zong-qi, Lee Wing Tat Chair Professor of Chinese Literature and Director of the Centre for Humanities Research (CHR).

As lofty as they may seem, Prof Cai’s dreams are coming through thanks to his research efforts over the years. From co-founding Journal of Chinese Literature and Culture (JCLC) published by Duke University Press and relaunching Lingnan Journal of Chinese Studies to serving as the general editor of How to Read Chinese Literature, a ten-book series published by Columbia University Press, Prof Cai promotes in-depth dialogues between Western and Chinese literary theories.

After assuming the directorship of CHR this past January, Prof Cai rolled out a new initiative-revamping Journal of Modern Literature in Chinese (JMLC), founded in 1987 by CHR. With a new title, Prism: Theory and Modern Chinese Literature (Prism), the revamped journal has a new and international orientation. Not only will it be jointly sponsored by Lingnan University and the University of Illinois, it will also be published by Duke University Press, allowing it to enjoy productive synergies with a host of Duke journals.

Apart from presenting cutting-edge research on modern literary production, dissemination and reception in and outside China, Prism will also publish works that study the shaping influence of traditional literature and culture on modern and contemporary China. Taking advantage of Hong Kong’s unique geographical and cultural vantage point, Prof Cai expects Prism to include Sinophone works in the purview of modern Chinese literature and scholarly investigations from interdisciplinary and cross-cultural perspectives.

“The proposed journal launch has been well received by many prominent scholars of modern Chinese literature. The future symposiums and conferences organised by the CHR will serve as primary venues of face-to-face interaction between scholars of Western and Chinese literature,” said Prof Cai.

As Lingnan continues to strengthen in strategic areas for future research development with reference to the Research Assessment Exercise, the launch of Prism and the new developments at the CHR will no doubt contribute to the University’s scholarly excellence.