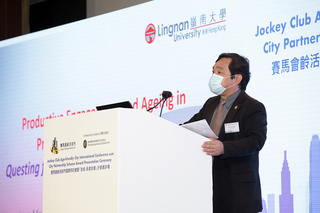 At the thematic session, Professor Joshua Mok, Vice-President of Lingnan University, delivered a talk about “Productive engagement and ageing in productivist welfare regimes: Questing for an age-friendly city in Hong Kong”. In the talk, Professor Mok discussed the importance and impact of productive ageing and welfare on society from an international perspective. Professor Mok also and shared the findings of the LU research team.

“Productive ageing has been an internationally strategic direction of social policy development, but few studies have placed the discourse within the context of welfare regimes,” Professor Mok said. A survey of people aged 60 and above in Tsuen Wan and the islands found that respect and social inclusion, outdoor spaces and buildings, and community support and health services, were all associated with productive engagement in both districts​, despite differences in the perception of various age-friendly city domains.

“Surprisingly, economic and health factors were not associated with productive engagement in either district, despite their significant differences​,” Professor Mok added.

The research highlighted the importance of a place-based approach, and structural factors including age-friendly environments. Productive engagement is commonly associated with elements of the social atmosphere, the built environment, and social provision, but not with individual conditions such as income and health, said the research.

“Promotion of the age-friendly city can play an important role in promoting positive engagement, leading to healthy and productive ageing in place,” Professor Mok pointed out. 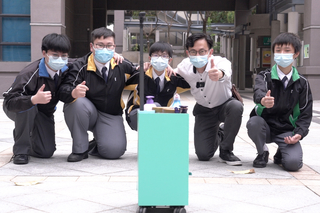 Over the years, Lingnan has played a key role in promoting and facilitating the development of smart ageing and gerontechnology in Hong Kong. LU has engaged in extensive pioneering research and social projects, including the LU Jockey Club Gerontechnology and Smart Ageing Project, a three-year programme attached to the Gerontech-X lab which provides educational courses and workshops for students, the elderly, carers and the general public.