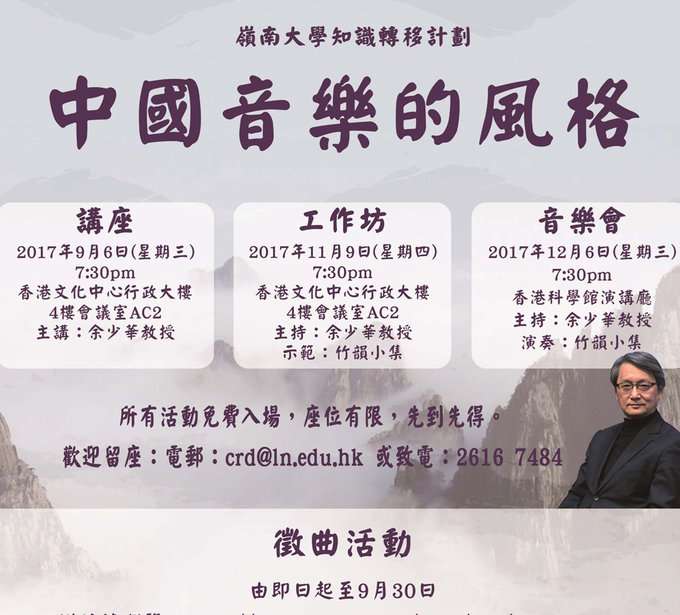 Kwan Fong Cultural Research and Development Programme of Lingnan has been organising a series of activities to raise music workers’ understanding and music enthusiasts’ sense of appreciation towards “Chinese music” style.  Co-organised by the Windpipe Chinese Music Ensemble, the series receives venue sponsorship from Leisure and Cultural Services Department of the HKSAR Government, as well as support from RTHK Radio 4.

Many people believe that Chinese music is typically an ensemble composed of instrumental monotones.  In fact, ensembles of traditional Chinese music often adopt heterophony with polytones.  Textures, or known as Zhiti, of modern Chinese music vary much across characterised combinations of instruments and ancillaries for timbres.  Although it may not appear as common pieces among the public nor performances in Western instruments, Chinese music manages to bring the taste of “China” to audience once being heard.  The fantasy has its rationale worthwhile to be explored and understood between music workers and audience.

As one of the knowledge transfer projects of the University, the series of activities organised by Kwan Fong Cultural Research and Development Programme is hosted by Prof Yu Siu-wah, a renowned scholar on Chinese music.  With targets as music enthusiasts and music workers, it involves submission of entries, seminar, workshop (open rehearsal) and concert to be published in recordings and articles for future documentaries.  The seminar was held on 6 September at the Hong Kong Cultural Centre.