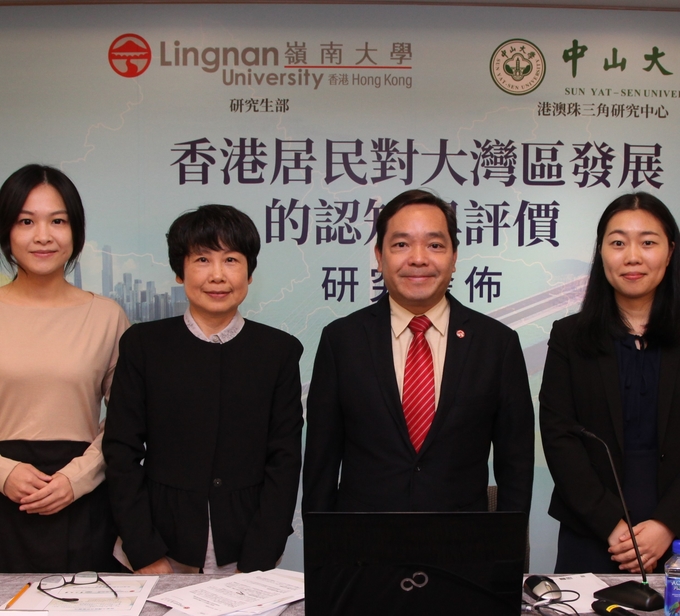 On 23 October, Lingnan University and Sun Yat-Sen University jointly released a research report titled “Perception & Evaluation of Hong Kong residents of the Greater Bay Area Development”, whose main objective was to explore the relationship between Hong Kong residents and the Greater Bay Area (GBA)*, their perception and evaluation of it, as well as their concerns about living there.  In addition to the suggestion of introducing policies to promote a better understanding of the GBA among Hong Kong residents, academics from both universities also proposed new models of cooperation between Hong Kong and other GBA cities, such as the mutual execution of Health Care Voucher and Old Age Allowance.

In his presentation at the press conference, Prof Joshua MOK Ka-Ho, Vice-President of Lingnan University said that sightseeing-based tourism was a key form of interaction between Hong Kong residents and GBA cities, as more than half of the respondents had not visited the GBA in the past year, while those who had visited the GBA listed sightseeing as their main purpose.  Prof Mok was confident that the Guangzhou-Shenzhen-Hong Kong Express Rail Link and the Hong Kong-Zhuhai-Macao Bridge would create easy access to facilitate the exchange between these two areas.

He also pointed out that in addition to “entertainment” and “food”, governing authorities should also provide more information about business and employment, so as to help Hong Kong residents better understand opportunities in the GBA for business and career development.  While a series of planning and policies had been launched in GBA cities to bring convenience to the public, it still required further publicity about their implementation, and how they would benefit Hong Kong residents.  Meanwhile, he added that the HKSAR Government should explore new models to cooperate with cities in the GBA to facilitate Hong Kong residents to work and live in the GBA, in particular, to enhance the cooperation in areas such as the probability of Hong Kong residents enjoying their previous benefits (such as Health Care Voucher and Old Age Allowance), the education of their children and the tax system in the GBA.

Please click here for details of the research results.