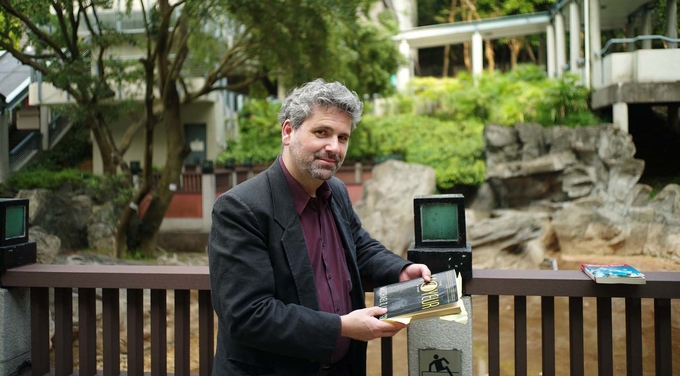 As the writer-in-residence for Lingnan University’s English Department, Michael Luongo believes one of his main missions is to inspire students to find the confidence to explore and express their creative “voice”.

In his teaching as well as his writing, he draws on his wide-ranging interviews and encounters with a who's who of famous people. The list includes Pope Francis, US presidents Donald Trump and Bill Clinton, Queen Rania of Jordan, Duchess Sarah Ferguson, actress Sophia Loren and many others.

Luongo’s travel experiences have also given him special insight on everything from LGBT issues to life in war zones, the latter from his time reporting from Iraq and Afghanistan.

Having visited more than 100 countries and written 16 books, primarily on travel, Luongo notes that he has plenty of material to draw on.

“I think students enjoy hearing my stories, which helps me to connect with them,” he says, pointing out that about 10 per cent of Lingnan's students are on exchanges from overseas. “This means we are working with a body of students from different backgrounds and cultures who are curious about the world.”

That quality is a key factor in becoming a successful writer.

“You have to meet lots of people, introduce yourself to strangers, find interesting friends, and maintain contact with them,” Luongo says. “You also have to figure them out and work them into stories.”

All this means the “non-writing” process can be as challenging as the writing process, something he highlighted in his seminar on “Meeting Popes, Presidents and Princesses: A Cross-Continental Life of Writing, Glamour and Adventure” at Lingnan last year.

“The thing to remember is that every creative writer, journalist or poet started somewhere,” he says.

At times, he encourages students to take the “if you don’t try, you’ll never know” approach to creative writing by suggesting they just sit down and have a go. But in doing so, he also believes it is important to demystify some of the myths associated with writing.

For example, there is the misperception that writing any kind of story is easy. The reality, Luongo emphasises, is that the process often involves many hours of research, a certain amount of self-promotion, battling with editors, and dealing with rejection.

“I believe it’s also important to teach the interpersonal and soft skills that writers need to develop their careers,” Luongo says. “That is different from teaching actual writing skills.” He taught a course on Arts, Creative Writing, and Journalism in 2018, which was funded by the Lingnan Foundation. In the semester after, besides offering that course again, he instructed one on Journalism Principles and Social Media.

“It is great helping students with their work, nurturing them and showing them how journalism fits with other forms of writing,” Luongo says.

He believes writers should not feel the need to restrict themselves to a single genre. To introduce new concepts and encourage critical thinking, he likes to accompany students to literary festivals, exhibitions and newsworthy events. To further broaden their horizons, he also invites experienced professionals from different fields to talk to his creative writing and journalism classes.

For instance, he organised a panel discussion with the Department of English in May and invited representatives from the US Consulate General of Hong Kong and Macau, PEN Hong Kong, the Hong Kong Journalists Association, and Reporters Without Borders as well as former lawmakers to share their views with students on the campus. During the term, he also invited the host of an American TV travel show who was filming in Hong Kong to come along and discuss recent issues.

Inspired by Lingnan's history and noting the University’s recent 50th anniversary, Luongo says that professors must keep striving to meet the highest possible standard of education.

“In my small world, I want to do the same thing,” he says. “I can see that the issue of free expression, and how you teach this to students, is important.”