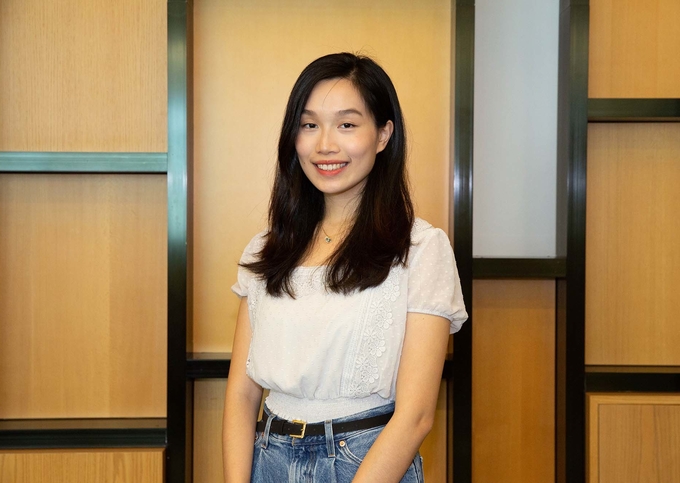 Mary Garcia has always benefited from English speech, English songs, and foreign-language movies. When it came to deciding which major subject to study at Lingnan University, she thinks Contemporary English Studies was a good choice that came naturally. As a Chinese-Filipina, Garcia is a native Cantonese and English speaker. Now entering the fourth year of her degree, she says that the most enjoyable part of campus life over the past three years has been living in the dormitory.

“I joined the student hostel association as a member to help organise activities for hostel residents. Elected publications officer, I was responsible for the promotional work. As a team member, I had to get to know each resident of the hostel, so as to be able to address them by name whenever I saw them in the dorm. I believe this is the basic requirement for each committee member,” Garcia says.

Through the activities organised for the hostel, such as the Halloween celebration and the hostel’s 20th Anniversary Dinner, Garcia has expanded her social circle and become more outgoing and confident, as she’s the one who contacted people and invited fellow students to join their events.

Garcia’s proficiency in languages and outstanding presentation skills have brought her onto the stage as the emcee for the 2017 Graduation Dinner. And that satisfactory public performance has made her a sought-after emcee for many other important university occasions, such as the opening ceremony of The Art of Szto Wai Exhibition in 2019, the Honorary Fellowship Presentation Ceremony in 2018 and the 50th Anniversary Closing Ceremony in 2018, where she interviewed Mr Woo Fung (a.k.a. Sau Gor), a TV celebrity and an Honorary Fellow of Lingnan University.

“I found out about the interview at the last minute. There was only time to do a swift search online for background information. With the support of my fellow emcee, who was a professional wedding emcee, the interview went seamlessly and successfully, and Sau Gor’s sense of humour turned the mission into an easy job.”

Having built up her self-confidence on stage, Garcia manages to remain relaxed and speak fluently in front of an audience of hundreds. However she believes one can’t build a house without strong foundations — and that is language.

That’s why she’s very happy with the degree she’s taking, especially the practical subjects such as discourse analysis and sociolinguistics, which not only make her understand the relationship between language and society, but also polish her written and spoken language.

“I enjoy the student-oriented small-class teaching that emphasises a close teacher-student relationship. We are encouraged to express our views and feelings in class. Our teachers are very friendly and they stress interactive and freestyle teaching, which gives us a thorough understanding of the academic subjects. For instance, we have the writer-in-residence, Michael Luongo, to teach creative writing and journalism. He explains the importance of emotional elements when writing an article. He also encourages us to broaden our views by exploring the world more in order to be a good writer.”

To broaden her mind, Garcia never hesitates to join in activities.

This March, Garcia partnered with three fellow students to participate in Project Campus 2019, a marketing campaign competition organised by the fashion magazine Cosmopolitan. The team worked closely on the creative direction and tactics, including proposal writing, interview arrangements, filming in Macau, post-filming production and on-street promotions. Garcia took on the role of team leader, managing the teamwork and looking after social media.

“Through the social media work, I started to get a solid grasp of techniques to manage posts.  For instance, we got more likes when we posted images of our team working behind the scenes and when we posted them at dinner time. I spent a lot of time and energy drafting the posts for social media.”

With the positive feedback from social media, outstanding time management and the team’s commitment to the project, Garcia’s team finally won the competition.

In the meantime, she has become keen to pursue a career in marketing and public relations. She also thinks that content marketing in social media could be interesting.

Under the Lingnan internship programme, last year Garcia interned at the American Chamber of Commerce in Hong Kong and worked in its Government Affairs Department, assisting with research related to the Fugitive Offenders Ordinance and the Greater Bay Area, as well as other press releases. She’s glad that she’s been more exposed to society and the world of politics and has an understanding of public affairs.

Despite having some ideas about what career to pursue, Garcia still hopes to explore more possibilities before deciding which direction to take. When the new semester starts this year, Garcia will go to North Carolina in the United States for three months for a student exchange programme at High Point University.

“I love the culture of the US since i was young. I believe it’s an ideal place for language exchange. As it’s my first opportunity to study abroad, I hope to acquire independence, friendship and international perspectives, opening myself up to a world of opportunity,” Garcia says.