Many people only see antique Chinese costumes (hanfu) in movies or museums, so it is difficult for them to imagine that in international cosmopolitan Hong Kong, there are young people who wear hanfu every day to espouse traditional Chinese culture and aesthetics.

"My family and friends support my wearing hanfu every day. Even when I was a child, my family attached great importance to traditional culture, and encouraged me to read classical poetry, and visit museums and other cultural sites," Huang Haiyun, Year Four translation student, says.

Two years ago, Haiyun decided to dress in hanfu every day. "It is not just a piece of clothing to cover the body, it is the crystallisation of China's 5,000-year-old dress culture and etiquette, summoning up a splendid history. Wearing hanfu enhances the cultural self-confidence of Chinese people, and their sense of national identity and cohesion."

Haiyun joined traditional cultural associations at high school, and showed her clothes to teachers and students, as well as organised hanfu publicity activities on campus. On an occasion when a group of educational experts from the US visited the school, she seized the opportunity to show them hanfu with Chinese dancing and music. Her success has given her the confidence to wear and popularise hanfu. 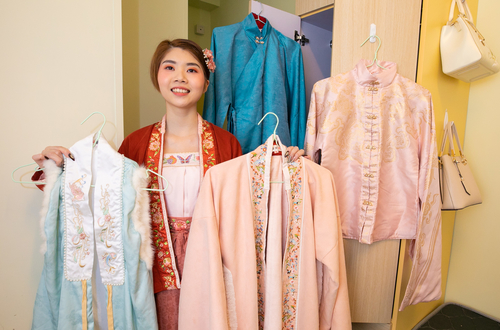 Haiyun understands every detail of her collection: "The biggest difference between hanfu and today’s clothes is that hanfu cutting is two-dimensional -- or flat -- while today’s garments are three-dimensional." She added that each dynasty had its own style of hanfu. Taking the Song Dynasty hanfu she was wearing as an example, she explained that it belongs to the category of regular clothing, and is lighter and more casual than "little and big dresses, so wearing it for housework is hassle free!"

To further promote hanfu, Haiyun is an active member of a number of hanfu groups, and writes articles in English to promote Chinese culture to a wider audience.