People have been forced to adapt to the new normal in the wake of the COVID-19 outbreak. Evidence suggests that people’s subjective well-being has deteriorated especially in societies where the negative impact of the pandemic is relatively large. However, a recent study conducted by Lingnan University (LU) reveals that Japanese older adults’ life satisfaction, as compared with their younger counterparts, had substantially improved during the pandemic, indicating their resilience on average.

This research analysed the data from a nationwide panel survey “Changes in Attitudes and Behaviors during the COVID-19 Pandemic” conducted by the Cabinet Office of the Government of Japan between May 2020 and October 2021 for 3,725 respondents aged 25 and over. Participants had been asked how satisfied with their life by using the Cantril Ladder, with 0 being the worst (i.e., not satisfied at all) and 10 being the best (i.e., extremely satisfied). The shift in life satisfaction was compared across three age groups: 25 to 44; 45 to 64; and 65 and above. Figure 1 summarises the mean scores of life satisfaction across three age groups at the two waves of studies. 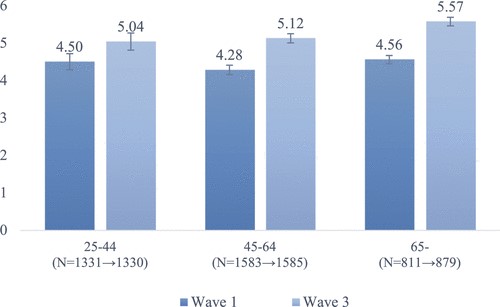 Prof Satoshi Araki, Assistant Professor of the Department of Sociology and Social Policy of LU, says that this study should be applicable to other Asian societies including Hong Kong. “Considering that older adults’ resilience during the COVID-19 pandemic has been reported worldwide even in the super-aged society Japan, it is logical to assume a similar structure exists in Hong Kong. Meanwhile, there is also a possibility that Hong Kong suffers a relatively larger extent of ‘resilience divide’ among older adults given the existing socio-economic inequality,” he said.

To address this pressing social issue and realise human flourishing in an ageing society like Hong Kong, Prof Araki added that multiple stakeholders such as policymakers, practitioners, and researchers must work together to reveal the distribution of socio-economic resources and resilience, thus fostering social policy and practice to support older adults, especially with disadvantaged backgrounds. It is also essential for the government or research bodies to collect high-quality panel data that permit both cross-sectional and longitudinal analyses.