The online questionnaire was conducted in early April, which successfully surveyed 1,040 mainland residents aged 18 or above living in the nine mainland cities of GBA (including Guangzhou, Shenzhen, Foshan, Dongguan, Zhuhai, Zhongshan, Huizhou, Jiangmen and Zhaoqing). With 10 being very good and 0 representing not ideal, the survey invited respondents to give scores to medical staff, their local governments, Hong Kong and Macau governments on their performance of epidemic prevention. The results showed that the medical staff received the highest score of 9.41. As for the governments in mainland GBA, Hong Kong and Macau, mainland governments took the best score with the average of 8.61 and Zhuhai got the highest mark (8.88) in nine mainland cities followed by Dongguan (8.81); Regarding to Hong Kong and Macau, the government of Macau gained 8.36 and Hong Kong scored 7.14. 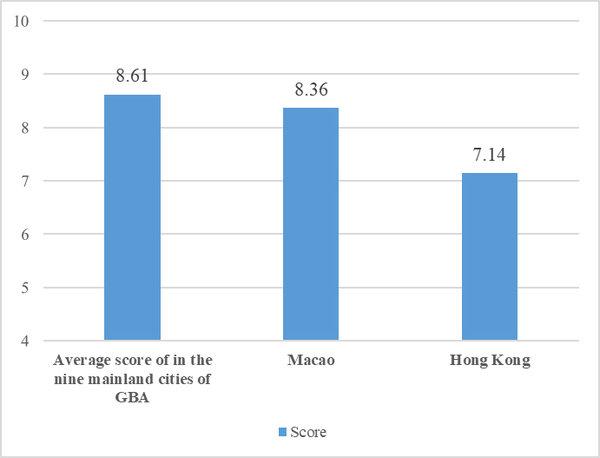 This survey also asked participants to evaluate their overall impression of Hong Kong and Macau. It revealed that most respondents agreed that Hong Kong is “an economically developed city” (83.36%) , “a highly international city” (85%), “a shopping paradise” (83.55%) and “an open city” (68.85%); however, when evaluating whether Hong Kong is “a city with good social management”, “a safe city”, “an inclusive city” and “a friendly city” , the percentages of people’s recognitions were not high, which had only 25.1%, 16.16%, 29.81% and 30.96%, respectively.

The survey also showed, under the background of the epidemic situation in mainland where became stable but in Hong Kong where still faced greater challenges especially the comparative shortage of protective materials, more than 80 percent of respondents (80.67%) supported for mainland China to provide Hong Kong with protective materials such as facial masks to help it fight the epidemic. In addition, more than 60 percent of respondents (63.46%) believed if there were any Hong Kong or Macau citizens diagnosed with COVID-19 in their cities, Hong Kong and Macau citizens should enjoy the free medical services as local residents did.

Prof Joshua Mok Ka-ho, Vice-President of Lingnan University, who led this research, said that GBA mainland residents’ evaluation of epidemic prevention in Hong Kong was not negative, which was only slightly inferior than mainland and Macau. However, he believed that what actually needed paying great attention was the GBA mainland residents’ overall impression of Hong Kong. He stated that, as clearly showed in the survey, mainland residents in GBA didn’t negate the degree of economic development, internationalization, convenient shopping and openness of Hong Kong, however, they had reservations about the “urban governance”, “safety”, “inclusiveness” and “friendliness” of the city’s performance. Professor Mok said that Hong Kong was an international metropolis where tourism was one of the important pillar industries. Whether tourists agree that Hong Kong is “socially well managed”, “safe”, “inclusive” and “friendly” will have a direct impact on their willingness to visit Hong Kong and to consume, which will also have a profound influence upon the development of Hong Kong.

Professor Mok suggested that after the epidemic the government of Hong Kong should reference anti-epidemic work from all over the world to review its own actions especially in the aspects of preventive measures and its communication with residents, namely, how to comprehensively and timely explain government policies. The government should also re-examine and institute its measures and work together with residents to improve the overall impression of safety and inclusiveness of Hong Kong to revitalize tourism.