The blueprint for the development of the Guangdong-Hong Kong-Macau Greater Bay Area (GBA), a strategy devised by President Xi Jinping, is gradually taking shape. The blueprint sets the stage for Hong Kong’s future development, with the implication that the city will play a leading role in the GBA, which consists of nine cities and two regions. The Outline Development Plan for the Guangdong-Hong Kong-Macau Greater Bay Area, published this year, confirms Hong Kong’s strategic position in the GBA. To strengthen ties between Hong Kong and the mainland, and to support the government’s efforts to promote cultural development within the GBA, Lingnan University has teamed up with the South China University of Technology to establish the Joint Research Centre for Greater Bay Area - Social Policy and Governance, which was inaugurated on May 18. The centre also released the findings of its first research project on May 18. 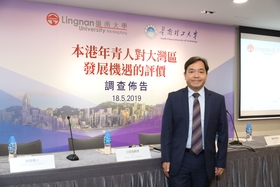 Professor Joshua Mok Ka-ho, Vice President of Lingnan University, said that the Joint Research Centre aims to glean a better understanding of daily life in the GBA, and will find out more about residents’ views, thoughts, and the topics that interest them, through research and surveys. “Lingnan is the first university in Hong Kong to collaborate with a mainland college to conduct research on the development of the GBA and related policies,” Professor Mok said. “Hopefully the centre can help the authorities promote interaction between people on both sides of the border.”

The centre is supported by a team of around 20 researchers from the South China University of Technology and around 10 researchers from Lingnan University. Discussions will revolve around living conditions in the area, social policies, and social governance. Researchers will also compare the GBA with bay areas around the world, and look at ways to enhance cooperation between the different cities within the GBA. The aim is to develop a cluster of culturally oriented cities in southern China.

Professor Mok noted that Hong Kong is inextricably linked to the development of the GBA. “Urban agglomeration is reinforcing the importance of Hong Kong’s bridgehead position,” he said. “The city should actively promote regional development and make good use of its own strengths, which include free capital flow, financial liberalisation, a highly efficient public administrative system, and liberal, transparent governance. This way, it can establish a leading position in the GBA and generate greater impetus in tandem with the growth of different sectors in Hong Kong.” 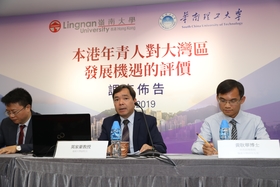 According to the survey, the young residents believed that if they were to work in the GBA, “Innovation and technology”, “Finance” and “Professional services”  were the three sectors in which they would find themselves most competent. They also saw the future of the “Cultural and creative industry” in a positive light. In recent years, a host of development schemes and preferential policies targeting Hong Kong people have been launched in the GBA to attract more young people from Hong Kong to the GBA. For example, eligible young Hongkongers can join the civil service sector in the mainland, and the city’s qualified teachers can teach in the mainland. The findings of the survey, however, suggest these measures are not attractive enough for young people in Hong Kong.

Future research on Hong Kong people retiring in the Mainland

Commenting on the future of the Joint Research Centre, Professor Mok said it would explore topics of concern to people in Hong Kong and the mainland, including elderly care. “In recent years, the Government has been encouraging people to retire in the GBA. Yet governments on both sides have not conducted much research on Hongkongers moving to the GBA when they retire. We therefore intend to carry out related research. Hopefully we can bring new ideas to governments and people on both sides,” Professor Mok said.