A philosophical and pragmatic perspective on art restoration 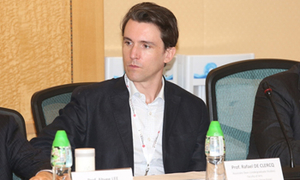 Whether by accident, malicious intent, or natural process, beautiful and culturally significant works of art tend to change or deteriorate over time. Examples from recent history range from a protester’s deliberate smashing of an Ai Weiwei vase at a museum in Miami in 2012, to the accidental 2019 fire which destroyed the roof and spire, and damaged the windows and vaulted ceilings, of the Notre-Dame de Paris cathedral. In such cases, a decision needs to be made as to what, if anything, should be done.

In his work in the field of art restoration, Professor Rafael De Clercq of Lingnan’s Department of Visual Studies has drawn on his understanding of aesthetics and metaphysics to answer two fundamental questions: first, what is art restoration supposed to achieve; and, second, what is permissible in the achieving of this goal.

The most common current guidelines for art restoration – such as The Venice Charter for buildings - assume that, when a work is restored, what is original and what is not should always be visible and immediately apparent to all viewers, not just experts. The materials used must be different in nature or colour, so that, for example, anyone looking at the modern Reichstag in Berlin can see its glass and steel dome was not part of the original stone structure.

However, this approach only became popular in the 19th century. Before that, restorers felt at liberty to, say, repaint portions of a painting, or make additions in the original style of a sculpture. From an ontological perspective, artworks were considered in a similar way to tables or chairs – that is, as wholes that have replaceable parts and which remain the same object despite these processes.

From the 19th century onwards, people began to de-restore such objects, taking away the unoriginal parts that may have been added in the 17th or 18th century. The celebrated art critic and writer of the time, John Ruskin, considered all restoration to be a form of deceit. He believed, for example, that all damaged buildings, however architecturally important or aesthetically pleasing they once were, should be left to become ruins.

Professor De Clercq, though, is unconvinced by the prevailing arguments for such a rigidly purist attitude to what constitutes permissible approaches to restoration. Though all sides of this argument accept the principle of “minimal intervention” - in other words, no more should be done than is necessary to achieve the goal of restoration - he considers a key restriction on what is permissible relates to identity.

While accepting, of course, that practical considerations, as well as the goal of the restoration, should be taken into account, he believes there are circumstances in which it is perfectly acceptable to add new parts to an artwork without making these additions immediately apparent. If the additions are documented, and there is no attempt to falsify the historical evidence, Professor De Clercq doesn’t see why this should be viewed as a form of dishonesty.