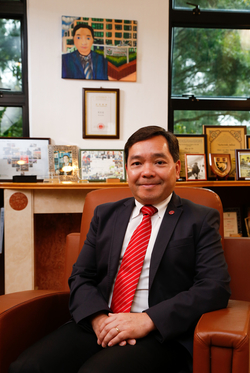 The Greater Bay Area (GBA) – a network of nine cities in Guangdong, plus Hong Kong and Macau – has a total population of over 70 million and already boasts an aggregate annual GDP of US$1.6 trillion. In its Outline Development Plan published in early 2019, Beijing set out its “innovation-driven and reform-led” vision for the GBA, a region it sees rivalling Silicon Valley as a global financial and technological powerhouse by 2035.

Alongside Shenzhen, Guangzhou and Macau, Hong Kong has been identified as one of the four pillars of the GBA. However, it is not only its widely respected legal system and its role as an international finance centre that marks the city out. Professor Joshua Mok, Dean of School of Graduate Studies, points out that Hong Kong, like other global cities such as London and New York, boasts a cluster of leading universities, with five in the top 100 of the world rankings.

Professor Mok believes that, with the future economic viability of Hong Kong dependent on the city seizing the opportunities offered by the GBA, local universities must ensure they are at the centre of innovation and technological research in the region. To determine how this goal can be best achieved, he is now leading a team from Lingnan, working alongside researchers from the Hong Kong University of Science and Technology, and the Education University of Hong Kong, on a major new three-year research project funded by the Hong Kong government’s Policy Innovation and Co-ordination Office to the tune of HK$4.37 million.

The first stage of the project, which is titled Accelerating the Development of a Global Innovation and Technology Hub in the Guangdong-Hong Kong-Macau Bay Area: The Roles of Public Research Universities in Hong Kong, is focused on a baseline assessment. This will seek to establish what the city’s universities have been doing in terms of innovation-driven research and knowledge transfer, and determine how their current performance can be improved.

The type of collaboration which aims to promote entrepreneurship and innovation is usually described in terms of a triple helix model, involving government, industry and universities. Nevertheless, in the said research project and his other research work, Professor Mok is challenging this model, as it fails to recognise the important role the wider society can play. He believes it is a mistake to fail to make use of the relevant knowledge within communities, and of their down-to-earth assessments of innovation, technology and their practical effects.

In the second stage of the research, the track record of mainland universities will be examined, and compared to their Hong Kong counterparts, while the third part will compare the functioning of the clusters of top universities in other main bay areas around the globe. Professor Mok points out that since this is an applied research project, the aim of the comparative studies will be to provide the government with advice on policy formulation.

Getting these policies right, he notes, may well determine whether Hong Kong can successfully leverage the strengths of the other GBA cities as partners, or lose out to them as competitors.