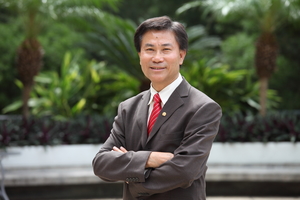 Economic policy can clearly have a huge impact on the lives of a nation’s people. This impact can be positive as, arguably, in the case of both President Franklin D Roosevelt’s New Deal, which sought to ameliorate the effects of the Great Depression in 1930s America, and in the implementation of China’s economic liberalisation policy, which is estimated to have lifted hundreds of millions out of poverty.

Conversely, global history has repeatedly shown that, in extremis, misguided policies can lead to civil strife.

Rigorous research by trained and experienced economists can provide politicians with analysis and advice that enable them to make more informed and, hopefully, better choices.

As well as being President of Lingnan University, Professor Leonard K Cheng is also Chair Professor of Economics. Over the years, his research work has influenced the handling of financial crises and the arguments used in fractious international negotiations. Even though the responsibilities that come with his role of President currently leave little time for his own research, a study he had worked on is impacting on a dispute that has been grabbing headlines around the world.

Since coming to office, United States President Donald Trump has attempted to make good on his election promise to drastically reduce the US trade deficit with China. To that end he has slapped tariffs on a variety of imports from China and is threatening to greatly widen the range of goods affected.

Leaving aside the efficacy of these tactics, there has also been doubt cast as to just how meaningful the quoted figures for the US-China trade balance actually are. To help separate the statistical wheat from the chaff, a decade ago Professor Cheng was invited to join an international group of economists and quantitative analysts in analysing the export data from the two countries.

The goal of this project was to calculate, not the gross imbalance, but the value added embodied in exports in the course of this bi-lateral trade. This is because many of the parts used in the manufacture of Chinese export goods are produced elsewhere in the world. Therefore, for example, the value of the Chinese input in the manufacture of an iPhone may only amount to about ten dollars, with the rest of the value added coming from the imported intermediate goods used.

By analysing more relevant data, Professor Cheng and the other members of the team were able to calculate that, over the years, the value added in China to its exports had risen from around 40 per cent of their worth to, approximately, 60 per cent, today. The comparable figure for exports from the US is about 80 to 90 per cent.

Their research showed that, as its economy has become technologically more sophisticated, the value added in China has increased and also that, even in terms of this more appropriate method of calculation, China still runs a surplus with the United States. However, this surplus is much smaller than the one claimed by President Trump.