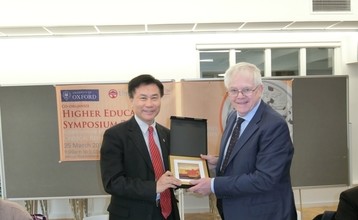 Celebrating the success of the economic reform and the introduction of the Open Door policy in China since 1978, whilst building a platform for critical reflections upon the expansion of higher education since 1998, Lingnan University and Oxford University co-organized Higher Education Symposium 2019 on 25 March 2019 at the Department of Education, University of Oxford.  The theme of the Symposium is "Expansion of Higher Education in China for Two Decades: Critical Reflections from Comparative Perspectives".

Professor Leonard K Cheng opened the symposium by sharing the unique contributions of liberal arts education in preparing students for uncertain futures with relevant and appropriate skill and knowledge sets, while Professor Marijk van der Wende shared the experience of how Amsterdam University College promotes liberal arts education and highlighted the importance of liberal arts education to future development of China's higher education. Professor Simon Marginson discussed how China had become a leading country in producing publications in sciences and engineering, showing national / global synergy in the development of higher education and science since 1978. Professor Joshua Ka Ho Mok critically reviewed policy and development of non-mainstream provision like minban (private) and transnational higher education in China, and discussed the need to rethink university governance and regulatory framework when promoting diversity in higher learning in China. Professor Shi Zhongying highlighted the importance of bringing ontology back in and argued for critical reflections on the purpose of universities in China, especially when the higher education system had experienced significant transformations from the elite to a massive system.

The discussions and presentations were intellectually stimulating throughout the symposium, touching upon major issues like the massification of higher education in China and its impact on graduate employment and social mobility, the role of research and teaching, challenges for university governance, as well as China's rise and its implications for the rest of the world. The symposium was concluded with great success, leading to deep collaboration not only between Lingnan University and Oxford University but also with other Asian universities joining the event.