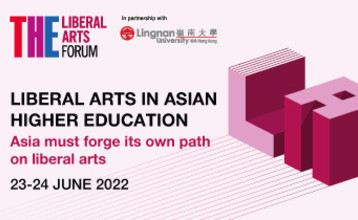 He noted that the liberal arts are often “associated very tightly with liberal democracy”, but that this is not a precondition for this form of education. “We also want to unpackage some of the things that come with this approach, such as ideology,” he said.

President Cheng suggested that Asian universities should turn inward for inspiration, as the region’s “rich tradition” of philosophies -- found in myriad sources, from Japan’s Buddhist tradition to the core values of the Koran -- encourages development of the “whole person”.

In two other sessions, LU Vice-President Prof Joshua Mok Ka-ho and Associate Vice-President (Academic quality assurance and internationalisation) Prof Shalendra Sharma provided their insights on the role of the liberal arts in promoting sustainable development, and the benefits of an interdisciplinary education respectively.

The first day of the conference attracted an audience of over 800 from all around the world.

This two-day international forum provides a platform for institutions and scholars from Abu Dhabi, Australia, Hong Kong, India, Japan, Mainland China, Thailand, Qatar and the US to discuss the important role of liberal arts education in enhancing quality education and research impact for the betterment of mankind.

Asia must forge its own path to liberal arts, leaders say - Times Higher Education (THE)