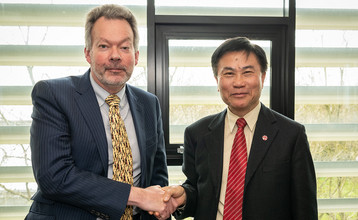 Lingnan University and the UK’s University of Bath have developed a strong collaborative partnership over the last few years, and these bonds were strengthened yet further in the course of the recent visit by a Lingnan delegation led by President Leonard K Cheng. An agreement between the universities to promote the exchange of postgraduate students, was signed by President Cheng and by senior management from Bath, led by Professor Jeremy Bradshaw, Pro-Vice-Chancellor (International & Doctoral).

“The exchange programme will enable students and faculty to work closely together to enhance their research and learning experience,” explained Lingnan’s Vice-President Professor Joshua Mok. “They will also be able to form strong teams to analyse social issues from a comparative perspective.”

Following round-table discussions between Humanities and Social Sciences faculty from both universities, agreement was reached to deepen the existing levels of collaboration. This enhanced collaboration will cover the area of international and comparative research on education and related development issues, and the creation of joint-PhD programmes.

It is Lingnan’s long-held belief that, with greater dialogue between Europe and Asia essential in a globalised world, the university is extremely well positioned, in relation to Greater China and East Asia, to play a central role in this process. Therefore, it comes as little surprise that Lingnan is one of the core partners in the new Centre for Research in Education in China and East Asia, which aims to create an inter-university, interdisciplinary network for the exchange of ideas around education and the social sciences, between Europe and Asia.

“I think the launch of the Centre for Research in Education in China and East Asia will provide a great platform for scholars coming from Asia to work with their European counterparts,” Professor Mok reflected.

Announcement by University of Bath

Report by Ming Pao (Chinese only)