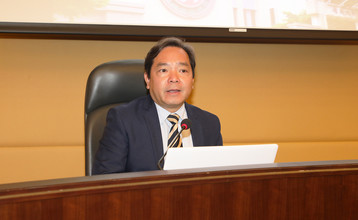 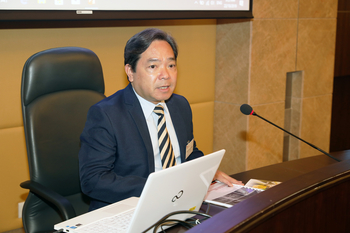 The second keynote presentation of the conference was given by Lingnan University’s Vice President, Professor Joshua Mok. He was introduced as the driving force behind research that has been going on at Lingnan around young people’s transition from education to work, particularly in relation to the Greater Bay Area (GBA).

In his presentation - titled, Calling for regional development and collaboration: Young people’s perceptions and evaluations of the development opportunities in the Greater Bay Area in South China - Professor Mok gave a detailed analysis of the results of the collaborative study he worked on earlier this year under the auspices of the Lingnan University-South China University of Technology’s Joint Research Centre for Greater Bay Area Social Policy and Governance.

“Central, regional and local government all see the Greater Bay Area as a great opportunity for development through the injection of economic incentives,” Professor Mok said. “But I think, as a social policy researcher while economic incentives are important, they should not be the only policy dimension.”

To find out how young people in Hong Hong Kong feel about the GBA, two groups were surveyed. One consisted of members of the general public, ranging in age from 18 to 35, and divided equally between the sexes. The other, of students completing their degree programmes in Hong Kong, either in universities or privately funded colleges. As Professor Mok was careful to point out, the study was conducted before the current protests on the streets of Hong Kong began.

The first part of the work with the group aged 18 to 35, looked at perceptions of the development opportunities in the GBA. Almost half of the respondents had a positive attitude towards these opportunities, while just over half thought the participation of Hong Kong in the initiative would further improve these opportunities.

The second part of the research looked at this group’s willingness to work in the GBA. Half of them said they found it difficult to find their ideal job in Hong Kong, and just over 35 percent said they would be willing to work in the GBA if an opportunity arose.

Beijing’s Outline Development Plan for the GBA includes a proposal to allow residents of Hong Kong and Macao to apply for public service positions on the Mainland. “However, less than 20 percent of our respondents would consider a civil service post in Mainland China,” Professor Mok explained, while under eight percent would consider teaching posts there.

The major concerns expressed by the respondents ranged from an inability to find suitable jobs in the GBA (67.2 percent) to issues around their children’s education (60.1 percent). The worry most frequently expressed, however, was about unsatisfactory salaries (78.2 percent).

The final part of the research on this group found that nearly 60 percent of respondents didn’t know that Hong Kong residents can apply for residency on the Mainland and enjoy the corresponding public services there.

The survey of Hong Kong’s undergraduate students revealed that around 35 percent of them were optimistic or very optimistic about the development in the GBA, whereas just over 27 percent were pessimistic of very pessimistic.

A little more than 50 percent of the respondents in this category thought the development of the GBA will provide them with better opportunities. While the proportion of them willing to work in the GBA was similar to that of the other sample group, at just under 36 percent.

There was also a similar spread of concerns about working in Guangdong - except that the top worry for the undergraduate group was internet restrictions, which was cited by just over four-fifths of them. Fifty-seven percent of the students were worried or very worried they wouldn’t find a job in the GBA.

In conclusion, Professor Mok said it was important to see the development of the GBA as not only a project promoting economic development, but also one of social integration of the people of the Mainland, Hong Kong and Macao. While economic incentives are important, the  promotion of trust and deeper understanding is even more significant.

To this end, he said, we need to understand what young people want and need. “It is time for us to re-examine the perceptions of young people in Hong Kong of the Bay Area, and their willingness to work and live there.”