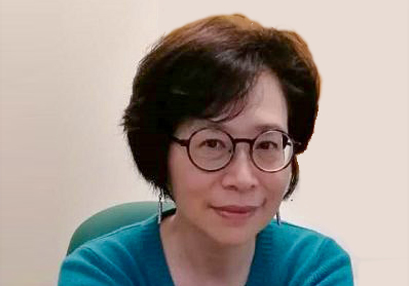 Professor Emilie Yueh-yu Yeh, Lingnan University’s Lam Wong Yiu Wah Chair Professor of Visual Studies, based her Chair Professor webinar on her two General Research Fund (GRF) projects that explore the exhibition of motion pictures in colonial Hong Kong and the reception these screenings received. Titled Screen Culture in Colonial Hong Kong (1897-1925), the presentation covered the period which stretches from the first film screening in Hong Kong to the emergence of a distinct Cantonese film industry.

Prof Yeh began by describing her work collecting thousands of news reports, and advertisements, concerning the early screening, distribution, creation and regulation, of films in Hong Kong. The Lingnan Library has taken this material and constructed an open-access database that will be launched this year.

The cuttings were collected from three English-language newspapers published at the time: the China Mail, the Hongkong Telegraph and the South China Morning Post. “Just relying on Chinese language sources would not have been adequate,” Prof Yeh explained.

One report, from the April 24, 1897, edition of the China Mail, records the dawning of a new era: “Professor Maurice Charvet, who arrived by the French mail steamer to Hongkong from Paris to exhibit 'Cinematograph' and the 'Kinetoscope' the twin marvels of the age. These have never been shown in Hongkong or the Far East before.”

While in 1924, the same newspaper reported on the opening of the Queen’s Theatre, describing it as the “Largest, Coolest and most comfortable moving picture house in the far East”.

In an effort to transcend the standard forms of historiography, Prof Yeh has used a framework for her research work based on three key concepts.

The first was the concept of Yinghua, or photo pictures. This describes the projecting, or the throwing onto the screen, of motion pictures for a diverse range of purposes, and is in contrast to the dominant Yingxi perspective, which sees film as an extension of traditional shadow play.

The second concept Prof Yeh drew on was Andre Gaudreault’s ‘Kinematography’. This notion described how, in the early 20th century, film co-existed with, and was programmed with, the prevailing forms of entertainment of the time. These forms included musicals, opera, magic shows and fairground attractions. “We have to go back to rediscover the wonder felt by audiences when confronted by moving images,” she explained.

The third was the colonial dispositif, a concept concerned with the practical arrangements, organisation, and apparatus, used by the British authorities to control and exploit the nascent film industry in Hong Kong.

In the latter part of her presentation, Prof Yeh explored this third concept. She said her main argument was that film regulation was framed and managed within the colonial policy of upholding “law and order”, through the maintenance of peace, public safety, health and hygiene, while also enabling financial exploitation, in line with Britain’s primary interest in setting up Hong Kong as a Crown Colony.

From the colony’s establishment in 1843, regulations had been introduced to help maintain British minority rule and control over the Chinese majority. Prof Yeh noted the particular egregiousness of an 1888 edict. “I think this is the most infamous ordinance, the ‘Chinese Regulation Ordinance’”. This controlled the social and cultural life of the local population, and even regulated the use of Chinese musical instruments in public areas.

The goal of the colonial authorities was not so much to put the majority Chinese at a disadvantage, as to make life more comfortable for the privileged expatriate community. To this end, the colony was divided into specific zones, with Chinese and Western theatres located in separate neighbourhoods – Western District and Central, respectively.

In the early years of the 20th Century, the authorities viewed Chinese theatres as lawless places, ethnic enclaves with poorer sanitary standards, and a much greater frequency of crowd control violations and criminal offences, than Western theatres. The image of a lawless ‘Chinatown’ was a recurring theme in English-language newspapers. Along with petty crimes, these newspapers reported on 20 murders in Chinese cinemas between 1904 and 1925.

Specific film-related regulations were initially introduced in Hong Kong in 1907, in the same year as the first purpose-built cinema opened. These regulations were used primarily as an instrument to ensure movie theatres’ compliance with standards of public safety and order.

Prof Yeh concluded by looking at the broader picture. She said that Hong Kong’s early screen culture can be seen as a microcosm of the territory’s colonial history.

In this British outpost and entrepot, science and technology took priority. In addition, even though Hong Kong was a place where opium was trafficked, and pirated films sold, it was aiming for a status more akin to London and New York, than to Singapore or Shanghai, and was therefore in need of first-run entertainment. Finally, along with the colonial regulation of commercial and social institutions, Hong Kong was notable for racial segregation and discriminatory law enforcement.