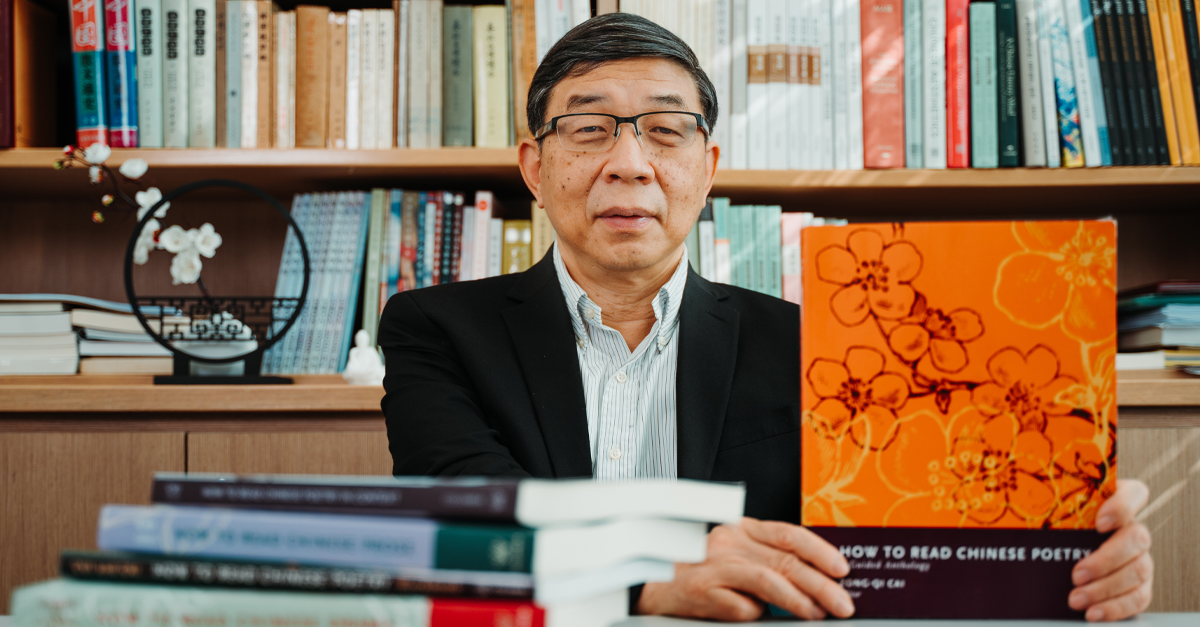 Having already seen Columbia University Press publish the first six books in his ten-volume series How To Read Chinese Literature, Prof Cai is now launching a podcast series which aims to give an even wider listenership the chance to appreciate classical Chinese poetry. Rather than college students, the podcasts will be targeted at an educated but more general, English-speaking audience, that has little prior knowledge of these works. “It’s for those with a broad interest in Chinese poetry and the culture behind it,” he says.

An audio journey through genres and dynasties

In each episode, one to three outstanding poems will be read, and discussed, in English, with their cultural milieu explored. Each of the poems will also be recited in Mandarin, and for Tang and Song poetry in Cantonese as well, by a professional reader, over a background of classical Chinese qin music.

“We want to help the listener go beyond pure translation,” Prof Cai explains, noting that there is a loss of some of the subtler forms of meaning in that process. “You do not really get the same aesthetic pleasure [from a translated text,] as you would get from the original, particularly for some hyper-condensed type of poetry.”

From February 1st, 2022, a new 15-minute podcast will be available each week on popular platforms, including Apple Podcasts, Spotify, Google Podcasts and Ximalaya (in Chinese Mainland). The full 52-episode series will cover the major poetic genres that have emerged and evolved over a period of almost three millennia, stretching from the early Zhou all the way to the Qing, the last of China’s dynasties, which ended in 1911. A team of experts will guide listeners through the rich heritage of Chinese poetry, poem by poem, genre by genre, and dynasty by dynasty.

By organising the 52 episodes into 20 topics within the dynastic periods, listeners will be able to gain a bird’s eye view of the development of Chinese poetry from antiquity to the modern era, and see the place of each individual poem with this arc.

The roots of Chinese classical poetry

“The Western literary tradition began with epics and with drama, and gradually lyrical poetry and fiction were introduced,” Prof Cai explains. “But Chinese literature does not have a tradition of epics, and the dominance of short lyric poetry lasted throughout all dynastic periods and is still alive today.”

Many classical Chinese poems originated as folk songs or narrative tales about the founding father of the Zhou dynasty. Later they came to be used by diplomats and courtiers to convey messages in the form of an indirect expression of the state’s intent. “Poetic talent became a key criterium for selection for promotion to high government office during the Tang dynasty, from around 600 to 900 AD.”

A journey to a global audience

Prof Cai’s bi-cultural outlook has been shaped by his experiences in his native Chinaand while studying and teaching in the United States. In his writing he has used Western theoretical approaches to examine the nation’s classical literature in fresh and original ways. He believes that knowledge of the Chinese literary tradition can also help people in other countries understand the cultural values that shape thinking within China.

And interest does seem to be growing, with sales of the published books in his How To Read Chinese Literature series far exceeding expectations. When the series’s first guided anthology came out, Prof Cai thought he’d be lucky if sales of the volumes on poetry reached 500 copies. “But it has turned out quite popular for an academic book,” he admits.

His podcast series is based on this guided anthology of 143 famous poems, which was designed to help students overcome language barriers and engage with Chinese poetical texts in ways that yield as much aesthetic pleasure and intellectual insight as one could glean from the originals.

Within the series, the five guided anthologies, in particular, offer innovative approaches to help overcome the barriers that have hindered the teaching of Chinese literature. While fine scholarly monographs on Chinese literature abound, they are usually too specialised for classroom use. To make that scholarship more accessible, each guided anthology uses commentary on individual texts, as well as broad surveys, to present highlights on major genres and writers.

While the application of digital technology in the form of podcasts is now opening up the possibility of an art form with such ancient roots being appreciated much more widely, Prof Cai is already looking ahead to the creation of a visual version for YouTube. He believes this version would enable even more sophisticated literary forms to be discussed, and their historical, cultural and geographical contexts to be represented.

How to Read Chinese Poetry Podcast