Lingnan University will confer honorary doctorates upon three distinguished individuals in recognition of their outstanding achievements in their respective professions and valuable contributions to the well-being of society. The honorary doctorate recipients are Professor Joseph LAU Shiu-Ming, Mr PAN Sutong and Dr Edmund TSE Sze-Wing, GBS.

The honorary doctorates will be awarded at the 49th Congregation of Lingnan University to be held at the Chan Tak Tai Auditorium of the campus on 22 November 2018. The ceremony will be presided by the Chancellor of the University and The Hon Mrs Carrie LAM CHENG Yuet Ngor, GBM, GBS, the Chief Executive of the Hong Kong Special Administrative Region.

Biographies of the honorary doctorate recipients:

Professor Joseph LAU Shiu-Ming is a renowned scholar in modern and contemporary Chinese literature, an educator, a translator and a writer. He is dedicated to the preservation, transmission and study of modern Chinese literature and has made enormous contributions to the field of translation and cross-cultural transmission.

Prof Lau is committed to cross-cultural transmission and the spread of Chinese literature. He has edited and translated a wide range of publications including The Columbia Anthology of Modern Chinese Literature (co-edited with Howard Goldblatt, 1995) and Classical Chinese Literature: An Anthology of Translations, vol. I: from Antiquity to the Tang Dynasty (co-edited with John Minford, 2000), which rank, in their own domains, among the most comprehensive English-language anthologies of Chinese literature in the Western academia. Some of his works have also been adopted in the U.S. undergraduate Chinese literature curriculum. In addition, Prof Lau is devoted to creative writing. Under the pen name “Er Can” (Second Wreck), he published on newspapers of Hong Kong and Taiwan a great variety of articles, which are distinguished by humorous style.

Prof Lau will be awarded the degree of Doctor of Literature, honoris causa by Lingnan University. 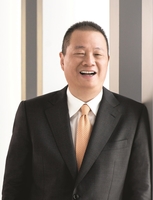 Mr Pan spares no effort in supporting education and the medical sector to give back to the community. With his generous donations, the Pan Sutong Shanghai-Hong Kong Economic Policy Research Centre was established at Lingnan University in 2014 and was upgraded to the Pan Sutong Shanghai-Hong Kong Economic Policy Research Institute in 2018. The institute aims to gather economic research talents from Shanghai and Hong Kong to study and promote cooperation between the two cities. He also supports the establishment of STEAM Education and Research Centre to enhance students’ knowledge in innovation and entrepreneurship as well as its application. Mr Pan has made donations to the Department of Pathology of Li Ka Shing Faculty of Medicine of the University of Hong Kong for genomic diagnosis and research regarding hereditary colorectal cancer. He also provided assistance to students in his hometown, Shaoguan, through establishing an educational foundation and funding the construction of middle school buildings.

Mr Pan has taken a number of leadership roles in order to serve the community. To help the Chinese business sector explore opportunities, Mr Pan jointly established the Belt & Road Initiative General Chamber of Commerce with other business leaders in 2017, and made a donation to set up a foundation where he serves as Chairman. Moreover, Mr Pan was the representative of the Hong Kong delegation at the 12th National Congress of the All-China Federation of Industry & Commerce, and was elected a National Committee member of the 13th Chinese People’s Political Consultative Conference in 2018. He has also served as the Honorary President of the Hong Kong-Shanghai Economic Development Association, Principal President of the 8th Council of Hong Kong Island Federation, Chairman of Hong Kong Polo Development & Promotion Federation, and Vice President of the Federation of International Polo.

Mr Pan will be awarded the degree of Doctor of Business Administration honoris causa by Lingnan University.

Dr Edmund Tse is the Non-executive Chairman of the AIA Group Limited, and the Chairman of the AIA Foundation. Throughout his long-time career in the insurance industry, Dr Tse was named President and CEO of AIA, and later the Senior Vice Chairman and Co-Chief Operating Officer of the American International Group, Inc. (AIG) (the then member company of AIG). He was responsible for overseeing the group’s global life insurance operations.

Dr Tse has been credited for bringing breakthroughs to the insurance industry, successfully introducing the agency system in Taiwan in 1970, and in China in 1992. The system remains a primary distribution channel in the industry. He was also the longest-serving member of the Insurance Advisory Committee where he provided professional advice to foster the development of the insurance industry. As the Chairman of the AIA Foundation and the Edmund & Peggy Tse Foundation, Dr Tse staunchly support charity works by overseeing fund allocation to a variety of programmes relating to education, community and medical institutions.

Dr Tse’s exceptional contributions to the insurance industry and the society earn him various honours and awards, including the Gold Bauhinia Star by the Hong Kong Government in 2001, and the honorary fellowship and the honorary Doctorate of Social Sciences conferred by The University of Hong Kong in 1998 and 2002 respectively. He was inducted into the prestigious Insurance Hall of Fame in 2003, becoming the first Chinese person to receive this honour, and was awarded the first ever Lifetime Achievement Award at the Pacific Insurance Conference in 2017.

Dr Tse will be awarded the degree of Doctor of Business Administration honoris causa by Lingnan University.