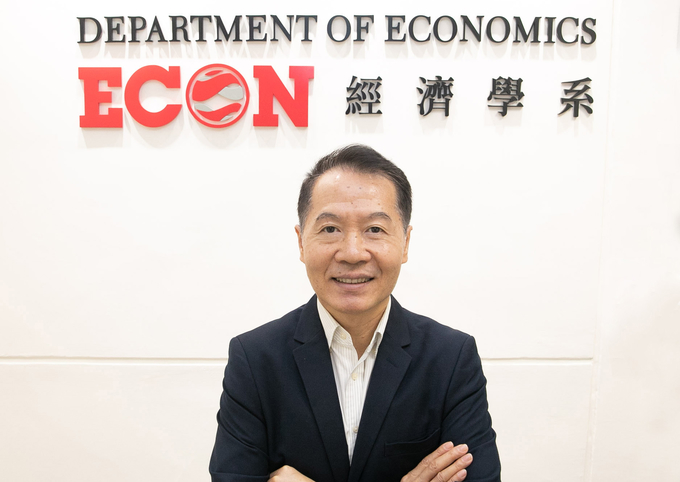 When Prof Larry Qiu Dongxiao (丘東曉) set foot on Lingnan’s Tuen Mun campus on 2 January, his first day as Sydney S.W. Leong Chair Professor of Economics and Head of the Department of Economics, he already had a clear vision and roadmap of how to raise Lingnan and the Department to a higher level.

First, by strengthening Lingnan’s research capacity and raising the faculty’s efficiency. “If you compare Lingnan to other institutions, we are good at teaching, but perhaps we are weaker in research, and that’s something we need to catch up,” Prof Qiu said.

Optimising class sizes and increasing collaboration will be key tactics proposed by Prof Qiu, who, in his more than 15 years at HKUST and then 11 years at the University of Hong Kong, helped to transform them both into world-class institutions.

“Small class size is good in the sense that teachers will pay more attention and close relationship, but, at the same time, if you’re talking about 15 students, 25 students, it’s not too different in terms of paying attention,” he suggested. “On the other hand, relatively larger classes are also better for the students. The atmosphere is different; the discussion, interaction, working together: that will also help. When each professor teaches fewer classes, by making class sizes larger, they have more time to put into each class and, at the same time, more time to do research. So I think it’s a win-win solution.”

Moreover, research can benefit the economy and the academics, and at the same time helps improve the faculty’s knowledge and this is transferred to the students and to society.

Research is undeniably limited by the size of a department. Lingnan’s Economics Department is half of the size of its sister institutions, and Prof Qiu sees increasing collaboration, particularly with institutions in Mainland China, as an effective means to tackle this. “There are lots of people there who have really good training in, say, mathematics, but they don’t know how to direct their research; they don’t know how to publish in English-language journals. We have the advantage. We can provide some leading posts where they will have the resources and technical support as well as an army of research students and assistants to work on projects.”

As an economics professor specialising in international trade and Chinese economy, Prof Qiu believes empirical research has become the focus of academics and the real world, and should therefore be the Department’s priority in this area. “In international trade, the general trend is for data to be more important, and China is important,” he explained. “If you’re talking about 20 years ago, using Chinese data on international trade was very difficult to publish, partly because people outside China knew little about China, and they didn’t trust the data and the methodology used. But now it has become a focus, and Chinese data is available. I think this empirically driven research and topics related to China are a good direction to take, not only in international trade, but also in other fields of economics.”

Prof Qiu, who was educated at Sun Yat-sen University in Guangzhou and got his master’s and PhD at the University of British Columbia, Canada, is currently working with economics scholars from several universities in China, including Sun Yat-sen, Fudan, Renmin, ZheJiang and Shanghai University of Finance and Economics. A recognised China expert, the professor is a popular media commentator on China and the China-US trade war.

“It’s very difficult to make a precise prediction, because the China-US trade war is not only a trade issue, it’s an issue of the general economy and political culture,” Prof Qiu clarified. “And then there are still many differences between the two countries, so conflict cannot be avoided. If you look at the big picture, I’m not optimistic you can solve the problem in just a few years.”

In his view, trade agreements will not end the “war”. “You will say that it’s good direction to take, but, after a few months, perhaps the US will come back and point a finger at you. The only solution, I think, is to talk, to communicate. In the past, if there was a disagreement between two people or two countries, if you chose a third party to help solve the problem, make the judgment, you didn’t have to talk to each other, but to the mediator, the court. But we don’t have a court. We used to have the WTO, but the WTO is not working; it’s not powerful enough. So without an independent third party to help, the only way to solve a problem is to talk to each other. And so, more dialogue is important.”

Prof Qiu’s dedication to China-related studies doesn’t stop him from enjoying sport.
He used to play football and is a Barcelona fan. Now he plays tennis and badminton occasionally,
and “tries to swim or jog every day — or a few times a week at least.”