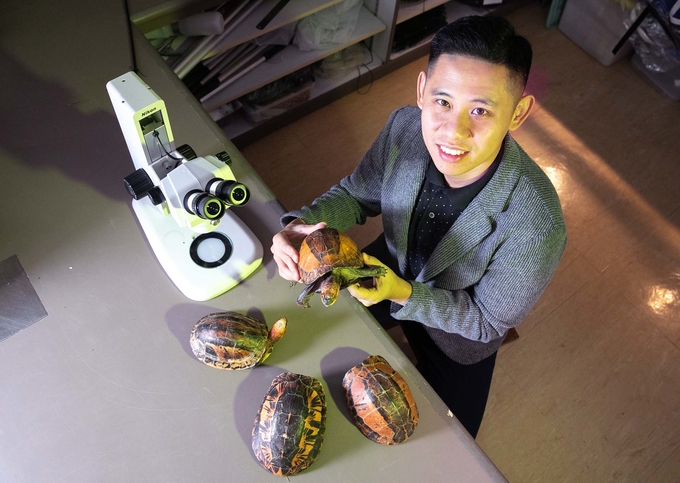 Hong Kong is famous for its commerce and 21st-century modernity, but also for its beautiful natural scenery and mountain trails. However, as the recent enthusiasm for hiking has shown, even the countryside can get a little overcrowded. And that means it is more important than ever to think about conservation and environmental protection and to lend a helping hand to creatures that live in the wild.

Worryingly, the population of amphibians and reptiles, some of which are unique to Hong Kong, has fallen dramatically in recent decades, and some species are now facing extinction. “All turtle species in Hong Kong are facing the risk of extinction, the major cause is that they are hunted for the pet market,” says Prof Sung Yik-hei, Assistant Professor of LU Science Unit.

His “Study on the Conservation Status of Platysternon megacephalum in Hong Kong”, together with two other projects, has received nearly HK$1.5 million in funding from the Agriculture, Fisheries and Conservation Department of the HKSAR Government. “The big-headed turtle was a lot more abundant when I did my PhD some 10 years ago,” he says. “But now most of the population has been ‘harvested’, and the numbers in local streams are very low.”

Prof Sung’s broad aim has been to assess the current situation of endangered species and come up with suggestions on how best to implement and improve conservation efforts.

To save endangered turtles from illegal hunting, he has made use of infrared cameras to “hunt the hunters”. This was part of a project entitled “Camera Surveillance & Trap Search in Freshwater Turtle Population Key Sites”.

“I put camera traps along the stream,” he explains. “When turtle hunters pass by, it captures a photo which will be sent to us instantaneously through the mobile network. We then go to the spot as quickly as possible to remove any trap or other device they have put in place.”

According to Prof Sung, who has practical conservation experience with NGOs and joined Lingnan University in 2019, an understanding of the ecology of the species is essential for conservation and management. In this respect, his “Study on the Genetic Provenance of Elaphe taeniura in Hong Kong” looked at the “new” species of snakes which only recorded in the wild in Hong Kong in the last 10 to 15 years.

The project has applied genetic analysis to determine the origins of those snakes. “If the specimen in Hong Kong is close to those found in nearby regions, say Guangdong, Guangxi or Jiangxi provinces, then it might be native, it might occur here naturally, but we have just not been aware of it,” he says. “But if we find that the specimen is genetically close to snakes found in faraway places like India, Malaysia or more distant parts of China, then we can say they are not native but must have been introduced by humans. In this case, we may regard this as an exotic species and removal from the wild in Hong Kong is preferable”

He regards conservation of species that are unique to Hong Kong as definitely of great importance. “I have a project on blind snakes and burrowing lizards; they are enigmatic animals and we know very little about them. One species, the Bogadek’s burrowing lizard, is endemic to Hong Kong, which means it occurs naturally nowhere else outside Hong Kong.”

Even here, he notes, they can only be found on three remote islands: Sunshine Island (周公島), Shek Kwu Chau (石鼓洲) and Hei Ling Chau (喜靈洲). “We want to find out more about the distribution, and where else they may occur. Then we can take steps to conserve them, given that the government is proposing large-scale reclamation near some of those areas.”

Notably, the project to “Uncover the underground -- Distribution and population status of endemic blind snakes and Bogadek’s burrowing lizards” received a HK$500,000 grant from the Environment and Conservation Fund.

Apart from conducting research, Prof Sung teaches science classes and actively encourages his students to volunteer for any of the Science Unit’s research projects which interest them. For many, this proves to be a truly eye-opening experience. “When I was in my first year as an undergraduate, I joined a study tour to Hainan Island,” he says. “One night we went out to find animals, and I saw my first wild frogs and wild snakes. I remember how that really opened my eyes.”

He is currently enjoying the chance to teach non-science students at a liberal arts university and hopes that, as graduates, they will be able to apply this scientific knowledge to a broad scope of industries and professions. “Take the example of an administrative officer in the government. If they have the right mindset about the environment, they can contribute more than an ecologist like me in terms of promoting the right policies.”

Describing himself a conservation biologist, Prof Sung admits that it is rare to realise and experience the “positive impact” of his research because situation is not improving most of the time. “My major goal, though, when I retire, is to have made sure there are still turtles in the wild in Hong Kong. It won't be easy and there’s still a long way to go.”