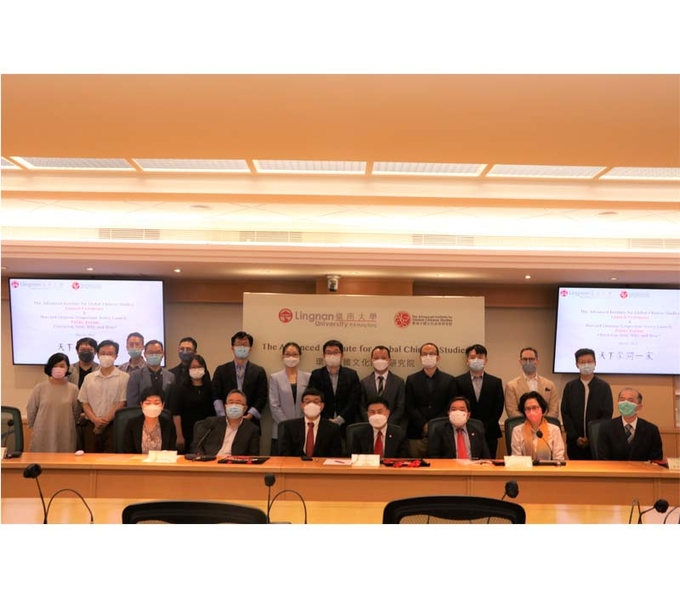 LU has established the Advanced Institute for Global Chinese Studies (AIGCS) to foster in-depth scholarly exchanges among institutions and scholars around the world in various fields in Chinese studies, including literature, language, philosophy, history, art and culture.

The launching ceremony, together with the Harvard-Lingnan Symposium and public forum, drew over 1,000 scholars and visitors from various countries including mainland China, the United States, Canada, Japan and Germany.

In his welcome speech, Prof Leonard K Cheng, President of LU said that there are three reasons for LU to establish AIGCS to promote international exchanges and collaboration in Chinese studies. First, LU has long-standing academic excellence in Chinese studies since its founding in Guangzhou some 130 years ago. Second, Hong Kong has a long history of exchanges between Chinese things and ideas and their foreign counterparts, it remains a unique place to engage in scholarly dialogues and collaboration, and continues to be a strong bridge between China and the west; and third, with the encouragement and support of the University Grants Committee (UGC), LU is committed to scholarly pursuits that result in high quality research outputs, and stands ready to advance by promoting collaboration with world class scholars from China and top academic institutions overseas. President Cheng is confident that AIGCS will promote high-quality research and enhance mutual understanding between people from China and the rest of the world with the joint efforts of partner institutions.

Mr Carlson Tong Ka-shing, Chairman of the University Grants Committee congratulated LU for establishing AIGCS. He said that Lingnan University has played a key role in fostering global scholarly collaboration in Chinese Studies and cross-cultural communication, and the establishment of AIGCS will further strengthen its efforts in the promotion of Chinese culture for cultural exchange, thereby contributing to Hong Kong’s development into a hub for arts and cultural exchanges between China and the rest of the world as outlined in the National 14th Five-Year Plan.

Prof Cai Zong-Qi, Director of AIGCS, expressed his heartfelt gratitude to the staunch support of President Cheng, the university management, the Arts Faculty, and the dedicated work of AIGCS staff, who have put into practice the initial conception developed in the summer of 2021. “Going forward, the Institute will build more advanced platforms of international collaboration, starting with the launch of the Harvard-Lingnan Symposium Series co-organised by the Fairbank Center of Harvard University and our Institute,” said Prof Cai.

Based in Hong Kong with a global vision, AIGCS has the unique advantage of publishing Chinese studies’ research achievements in both Chinese and English, which definitely helps break the barriers in language and culture. AIGCS will also build an international network for research cooperations with partner institutions and scholars on the mainland and overseas, and establish a high-quality platform for academic publishing, so that people around the world can truly understand, appreciate and accept Chinese literature and culture.

The Harvard-Lingnan Symposium Launch Forum was held after the launching ceremony with the theme “Classicism Now: Why and How?”. World renowned Chinese studies scholars were invited to share their insights, including Prof Chen Pingyuan, Professor of Department of Chinese Language and Literature of Peking University; Prof Wu Shengqin, Division of Humanities of the Hong Kong University of Science and Technology; Prof Leonard K.K. Chan, Department of Chinese Literature of National Tsing-hua University in Taiwan; and Prof David Der-wei Wang, Edward C. Henderson Professor of Chinese Literature of Harvard University in the US.