President shares with the media on the latest development of Lingnan 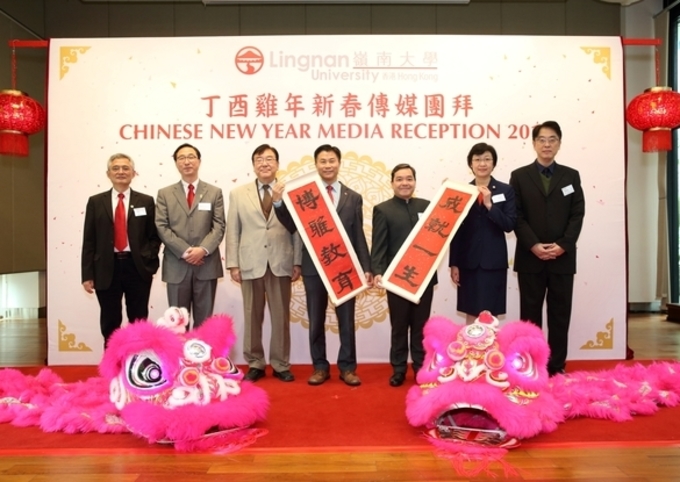 Lingnan University organised the Chinese New Year Media Reception 2017 on 8 February, during which President Leonard K Cheng and other representatives of the University met with and greeted friends from the media at the beginning of the Year of the Rooster.

In his address, President Cheng pointed out that 2016 was a fruitful year for the University. “During the year we achieved a significant leap of 33 places in our QS Rankings in Asia from 142 to 109.  Our commitment to fostering whole-person development of students through a liberal arts education was also commended by the Quality Assurance Council in its Report of a Quality Audit of Lingnan University published in October 2016,” said President Cheng.  In November 2016, the University announced its Strategic Plan for 2016-2022 which was formulated with the goals of steering Lingnan to the next level of excellence and addressing the education needs of the new generations.

President Cheng mentioned that Lingnan is going to celebrate the 50th Anniversary of its re-establishment in Hong Kong this year.  To celebrate this important milestone, a series of activities will be organised to enrich the public’s understanding of Lingnan, a Hong Kong story that lasts for half a century.  The year-long celebration is expected to start in the last quarter of 2017. Signature events will include a kick-off ceremony, a gala dinner, a lecture series by distinguished leaders, a Conference for Alliance of Asian Liberal Arts Universities, and a finale concert.

At the same time the University will strive to strengthen the brand of Lingnan.  A brand positioning statement has been developed, which reads “Lingnan University prepares students for future success and transforms them into global citizens in a rapidly changing world through its unique liberal arts education, distinguished by an interdisciplinary curriculum, small classes, a vibrant campus life and rich international exposure.”  A new tagline “Liberal Arts Education. Transformation For Life” has also been adopted to reflect the University’s brand essence.