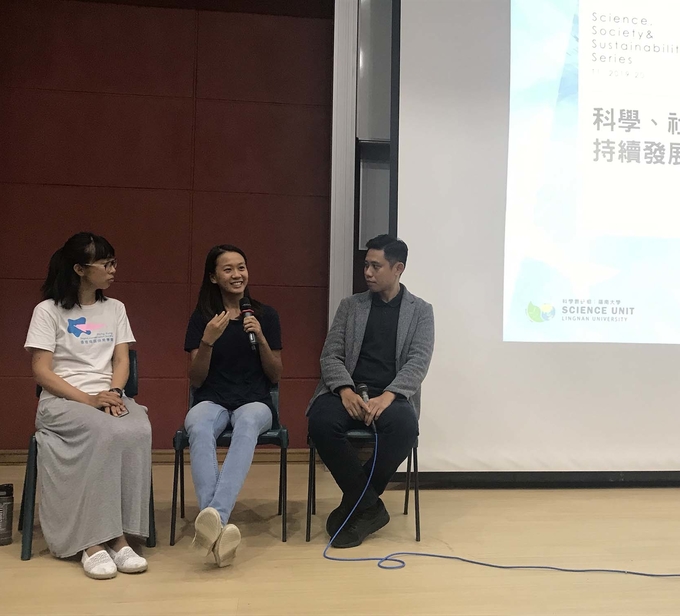 The Science Unit kicked off the Science, Society and Sustainability Series 2019 with “Documentary Screening – Breathing Room: Marine Pollution and Changes to Natural Ecology” on 19 September. The event attracted a full-house with around 240 participants including Lingnan staff, students and representatives from green groups as well as the general public.

Daphne Wong, Director of the documentary, and Viena Mak, spokesperson for the Hong Kong Dolphin Conservation Society, were invited to talk about the filming process and challenges, current dolphin conservation, and the relationship between land and social development and environmental conservation.

A post-discussion session was hosted by Prof Sung Yik-hei, Assistant Professor of the Science Unit, for further communication and exchange of views with the two guests on various environmental issues.

Breathing Room documents the plight of the Chinese white dolphin in Hong Kong. The film shows the research and conservation work being done to save the iconic pink dolphins, and discusses the implications of habitat loss due to continuous coastal development. It received the Gold Remi Award at the Worldfest-Houston International Film Festival and was nominated by the Innsbruck Nature Film Festival 2018 and the New York Wild Film Festival 2019. It was also the Official Selection of the Wildlife Conservation Film Festival 2019 and bestowed a Special Jury: Foreign Language Honor in the 2019 Jackson Wild Media Awards.