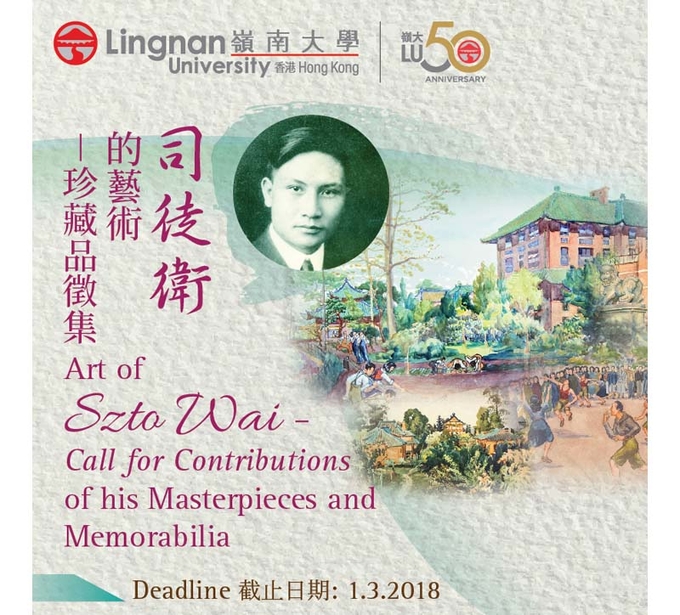 Mr Szto Wai (1889-1961) is an alumnus and former faculty member of Lingnan, and also the designer of the Lingnan emblem.  A graduate from Canton Christian College in Guangzhou in 1908, Mr Szto dedicated his life to education.  He joined the Lingnan faculty in 1910.  Upon the request of Dr Chung Wing-kwong in 1922, he founded Lingnan-affiliated primary and secondary schools in Guangzhou, Shanghai, Hong Kong and Saigon in Vietnam.  During the Sino-Japanese War, he was one of the key members of staff who led the students and faculty in relocating the campus to Taitsuen, a village north of Shaoguan in northern Guangdong.

As an educator, artist and administrator, he designed the Lingnan emblem and conveyed in his remarkable watercolour paintings a pictorial history of Lingnan in wartime China.  His watercolour of the old campus in South China is a great example of the indomitable Lingnan spirit.

The Art of Szto Wai Publishing Committee genuinely welcomes all contributions from alumni and other Lingnanians which will help enrich the scope of the exhibition and content of the catalogue.  Please click here for more details.

New appointment to the Court