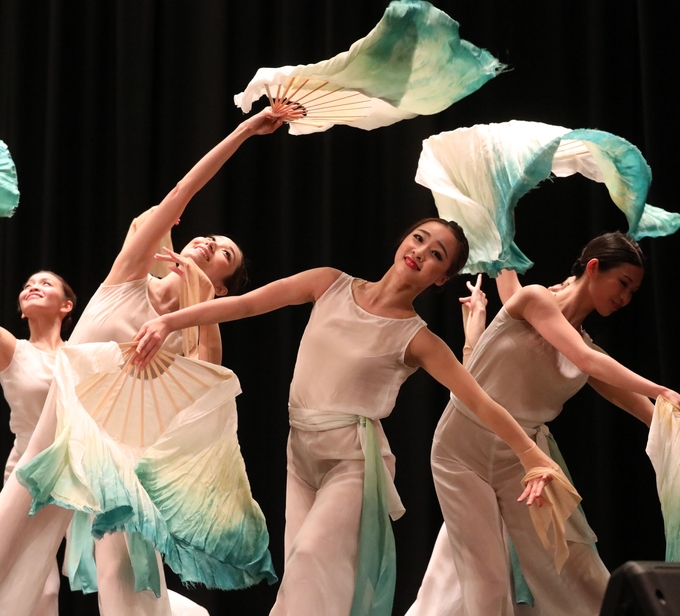 The Lingnan Arts Festival 2018, an annual gala of arts and cultural activities, came to a fruitful close on 27 March with the English drama performance “Animal Farm”.  Apart from featuring a series of drama, dance and musical performances, the Festival provided an opportunity for film appreciation and interaction with the Writer-in-Residence and Artist-in-Residence on campus. Professor Grace Chou Ai-Ling, Arts Festival Coordinator and Head of the Wong Bing Lai Music and Performing Arts Unit, shares her reflections on the Lingnan Arts Festival with Lingnan Touch here.

Set against the half-century of Lingnan’s re-establishment in Hong Kong, the eight-year history of the Lingnan Arts Festival seems very short. Yet, the Festival’s rapid growth is one of the strongest symbols showcasing Lingnan’s liberal arts vision. The Lingnan Arts Festival began as an “Arts Week” in 2011, a simple framework encompassing a few artistic events offered by the departments under the Faculty of Arts. The goal was to stimulate students’ interest in the creative and performing arts, given the burgeoning of the arts scene in Hong Kong. The overwhelming response from students and staff exceeded all expectations. Within a few years, Arts Week became a month-long Arts Festival, held annually in March. This year, total audience attendance exceeded 1700. In less than one decade, the Lingnan Arts Festival has become one of the highlights of Lingnan’s academic year—not only for our campus, but for the surrounding community as well.

The Lingnan Arts Festival is unique in its expression of the liberal arts vision. One special feature is the comprehensiveness of art forms included. While many arts festivals comprise only the performing arts— music, drama, dance, and opera—our representation of the arts also includes film, fine arts and creative writing, showcasing the multiplicities of artistic expressions. As liberal arts also highlights cross-cultural appreciation, our Arts Festival features art forms from cultures all over the world, with events from belly dance to Kunqu opera to English theatre to jazz. With the aim to engage the whole community in human artistic expression—especially when many residents of the Western New Territories are prevented by cost or travelling distance from enjoying performances in Central or Tsim Sha Tsui—the Lingnan Arts Festival provides a wonderful opportunity for bringing high-quality artistic programmes to our neighbours and friends.

The rapid growth of the Lingnan Arts Festival has been remarkable. In just a few years, it has transformed from a short series of informal events to an annual gala that cultivates community cultural life, hosting professional artists from all over the world.

I hope the University can continue to serve as a vibrant hub for staging the arts.