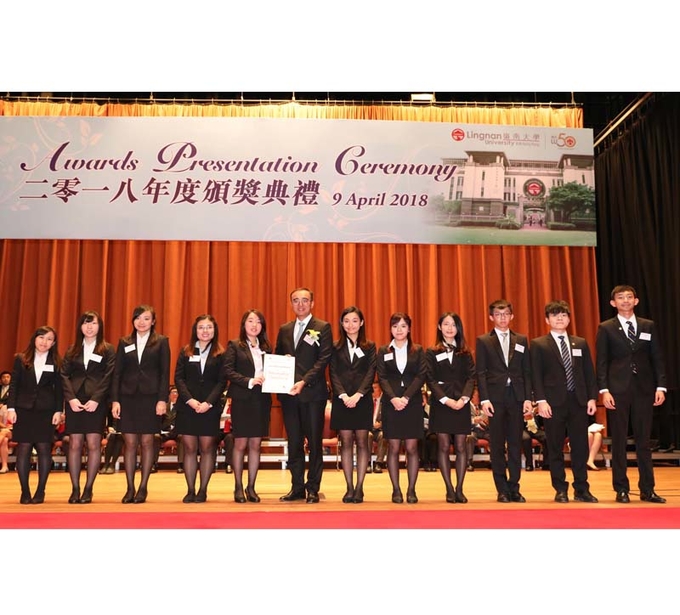 The Awards Presentation Ceremony 2018 was held on 9 April in which a total of 508 awards and scholarships totaling over HK$13 million were presented to over 350 students in recognition of their outstanding academic and personal achievements.  Mr Mason Wu Shang-tun, Court member and Honorary Fellow of Lingnan University was invited as the Guest of Honour of the Ceremony.

In his speech, Mr Mason Wu extended his sincere congratulations to all the scholarship recipients on their outstanding academic achievements and personal development.  He pointed out that Lingnan University offers not only a form of whole-person education emphasising academic studies, but also a form of training that helps develop a capacity for critical inquiry, a broad understanding of the world as well as care and contribution to the society.  “I fully embrace Lingnan’s devotion to promote entrepreneurship in the liberal arts context and cultivate students’ entrepreneurial spirit and experience through various local and regional entrepreneurial programmes,” said Mr Wu.  He encouraged Lingnan students to look for the opportunities and resources offered at the University, get the most from this invaluable learning opportunity, explore their potentials and prepare themselves for becoming prominent leaders in the new era.

In his welcoming remarks, President Leonard K Cheng thanked all donors for their unfailing support to Lingnan.  “Their generous donations to Lingnan over the years have helped us achieve our vision and mission, and more importantly have demonstrated their support of our educational philosophy,” he said.  President Cheng pointed out that award recipients at today’s Ceremony will become future leaders and innovators, not only for Hong Kong, but also of the world.  “I place high hopes on every one of them to become our ambassadors to show the value of Lingnan’s liberal arts education, and wish that they could contribute their knowledge and skills to serve our community,” he said.

This year the Most Distinguished Student of the University Award went to Miss Wong Tsing-sum, a year-four student of Psychology, while the Dr and Mrs James Tak Wu Award for Outstanding Service (Student Award) was presented to Miss Chan Yim-kwai, a year-four student of Translation in recognition of their outstanding performance and contributions to the University and the community.

Miss Wong Tsing-sum shared her experience of personal transformation at Lingnan at the Ceremony.  Citing the saying that “chance favours the prepared mind”, she encouraged fellow students that her life journey has told her “opportunity favours those who cherish it”, and attitude, persistence and determination can make a huge difference.  Please click here to read a feature story on Tsing-sum who shared her secret of triumphs in this issue of Lingnan Touch.