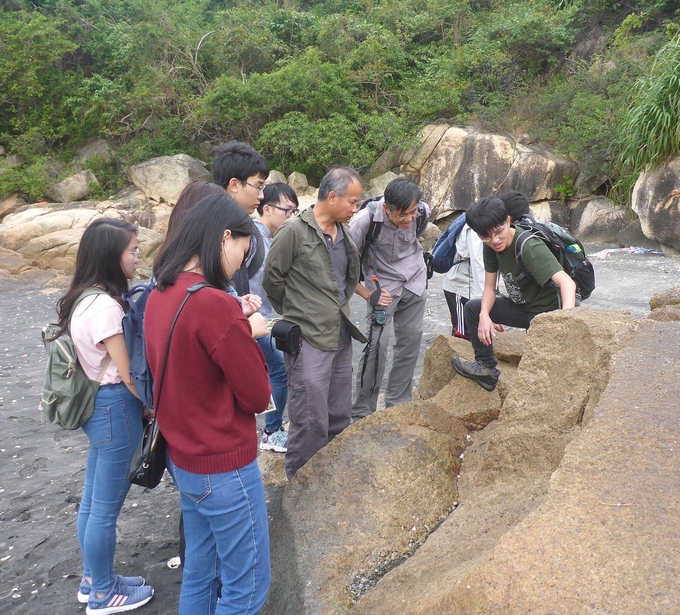 As a liberal arts university, Lingnan is committed to enhancing students’ knowledge of science through a number of science courses in the core curriculum. Outside the classroom, students are given enormous opportunities to conduct projects on campus and in the wider community with an aim to conserve our environment, and to protect the uniqueness of Hong Kong.

He further explains that the aim of citizen science, which is also known as community science or civic science, is to let non-specialists and members of the general public participate in environmental and scientific projects. It asks them to observe things about the environment and take measurements with simple tools that don’t require a lot of training.

For instance, one group of students is currently undertaking a project with frogs. “They are interested in what makes frogs call,” McGinley says. “In the afternoon, early evening, and late at night, the students go behind their hostel and listen for whether the frogs are calling or not. They keep track of data about the local temperature and humidity and get extra information about the weather from the Tuen Mun observatory. The objective is to find out which factor is most responsible for causing the frogs to call.”

Drawing on his own background in environmental science and ecology, McGinley believes that the frogs call most after it rains. In such projects, though, it is the experience and the process of learning that count as much as the actual results.

“In any citizen science project, there is no right or wrong answer. The important thing is whatever the students learn in their particular study. What makes it more successful is if they come up with their own ideas. We help them through the process and explain key scientific principles. I’m hoping that over the next two to three years we’ll be able to establish several more such projects.”

Another group is doing a study of birds. They walk around their hostel a few times a day, collecting data on how many birds they see or hear. Such projects often start with a small dataset, but it can grow significantly.

“It’s quite easy to imagine that in ten years, we could have really impressive datasets on many different subjects,” McGinley says.

“The Process of Science,” which is currently offered as a trial cluster course, will become part of Lingnan’s Common Core curriculum from the 2019/20 academic year onwards, with about 370 to 390 students taking it each term. These students will become engaged in an ever wider range of stimulating science projects.

McGinley and his team have also taken part in a number of Service Learning initiatives. One focused on “Developing intergenerational education partnerships to encourage conservation of reptiles and amphibians in Hong Kong,” and this year it earned him and colleague Prof Jonathan Fong Lingnan’s Knowledge Transfer Excellence Award.

“We wanted to develop a programme to expose students, younger children and the elderly to the reptiles and amphibians that live in Hong Kong,” he says.

The four-week programme last summer included lectures and night-time excursions to see reptiles and amphibians in their natural habitat.

“Many young people in Hong Kong don’t know about all the natural spaces around them,” Fong says. “It was the first time for many of them to go out hiking or hiking at night. But they got to see frogs, snakes, lizards, and more. We thought it was important for them to experience that.”

The other key aspect of the project was inviting elderly people to take part. Fong, who has taught at Lingnan’s Elder Academy, has found that they are sometimes more enthusiastic than the students, which makes the latter realise how much fun learning can be.

“My research mostly focuses on animals and evolution, in particular reptiles and amphibians, which include frogs, snakes, lizards and salamanders,” Fong says. “I’m most interested in looking at how these creatures are related to each other. For example, if there is a population of frogs in Hong Kong, how is this species related to one in Mainland China? By comparing the DNA, we can see how closely related they are and we can take steps to protect things that are unique.”

His latest research on “Building a natural history collection of Hong Kong’s amphibians for conservation and education, with a genetic case-study on the endangered Romer’s tree frog (Liuixalus romeri)” has been awarded a grant of nearly HK$1.1 million by the Environment and Conservation Fund.

Fong explains that, in order to protect its biodiversity, Hong Kong first needs to promote the comprehensive collection of its natural history specimens, including native plants, insects and animals. Though unable to amass them all on his own, Fong is determined to play his part by focusing on his specialty and making a collection of the local frogs, salamanders and other amphibians.

The second important step is to take tissue samples from each specimen and study the DNA.

Romer’s tree frog is a logical choice for further research because the species is unique to Hong Kong.

“When the government was building the new airport, a population of this frog was found on the Chek Lap Kok site and they actually had to decide whether or not to continue,” Fong says. “Of course, they decided to continue, but they took the frogs and moved them to other locations in Hong Kong, such as Kadoorie Farm, Pat Sin Leng and Tai Po Kau, to try and preserve them.”

Fong’s other major project is “Developing Environmental DNA Approaches to Study the Ecology and Conservation of Endangered Hong Kong Turtles.” It is funded by the Research Grants Council to the tune of nearly HK$830,000.

“Studying turtles is very time consuming and very tiring, because first you have to catch them,” he says. “The process involves placing traps, usually around mountain streams, so you have to hike out one day and then go back the next day to collect the traps. And there is a high probability that all the traps are empty, which means you wasted two days of work.”

The initial theory behind the project was that if a turtle is in the water, it will shed skin cells. Now technology exists that can detect and differentiate between the DNA of different species. This work is the starting point for identifying suitable locations and then studying the turtle populations in those locations. If researchers find a location that is DNA-positive for a species, then this increases the likelihood that it is currently living there (there can be false positives when the DNA has been preserved, but the species no longer lives there). Then they can designate priority areas for trapping and catching the turtles. If the scientific community verifies that there are turtles in a given area, it can be a site for future studies, and researchers can work with the government to increase protection of that stream.

This basic approach is also being used for a project with the Ocean Park Conservation Foundation that focuses on the study of the golden coin turtle (Cuora trifasciata) with reference to ex situ breeding and wildlife DNA forensics. The goals of this project are to understand the relationship between different populations of this endangered species (endemic to China, Vietnam, and Laos), and especially to identify the signature of the Hong Kong population.

“This turtle is of interest because it is local to Hong Kong and there are probably still some individuals in the wild. This species has probably disappeared from other parts in Asia,” Fong says. “So again, I’m going to use DNA and genetics to try and understand the biology of this species. It is found in different places, so I want to know how similar or different the turtles are in these various places, with the hope that we can then release some back into the wild in Hong Kong. This release work is being done in collaboration with Kadoorie Farm and the Agriculture, Fisheries and Conservation Department of the Hong Kong government.”

He adds that once scientists understand the pattern of the species, it is then possible to develop tests to see where individual turtles come from. That has a very practical application when it comes to helping customs officials prosecute people who illegally capture the turtles. If we know where an individual is from, we can return it to its home.

In addition, Lingnan’s Science Unit also studies urban living conditions in Hong Kong with a view to having a positive impact on society.

Prof Paulina Wong is leading a project on “Fine particulate matter pollution from incense burning at temples in Hong Kong.” Wong points out that the toxic effect of burning a stick of Chinese incense is equivalent to smoking approximately 5 to 10 cigarettes, depending on the brand.

“If you think of Wong Tai Sin temple and all the buildings surrounding it – public housing estates in particular – this could be a critical issue,” Wong says. “The impact on health from this kind of pollution hasn’t yet been fully explored.”

The two-year project, supported by an Environment and Conservation Fund grant of nearly HK$500,000, will be conducted in two phases.

“I will first try to distinguish between the pollution that comes from the temple and that from the main road,” Wong says. “In the second phase, I will be looking at the impact on health when the two are added together.”

Wong’s previous research has looked at urban climates and pollution. She frequently makes use of GIS (Geographic Information System) technology and map applications in her projects and teaching.

“Around 90 per cent of the questions you come across in life involve a location,” she says. “For example, for a marketing student doing an analysis of coffee shops in Tsim Sha Tsui, a map with all the relevant locations is essential for the project and in considering related topics like entrepreneurship.”

McGinley notes that because there are no natural science majors at Lingnan, it is possible to teach interested students the “best” subjects or what has most impact.

“I try to talk about things that are exciting to me and which are relevant to their lives,” he says.