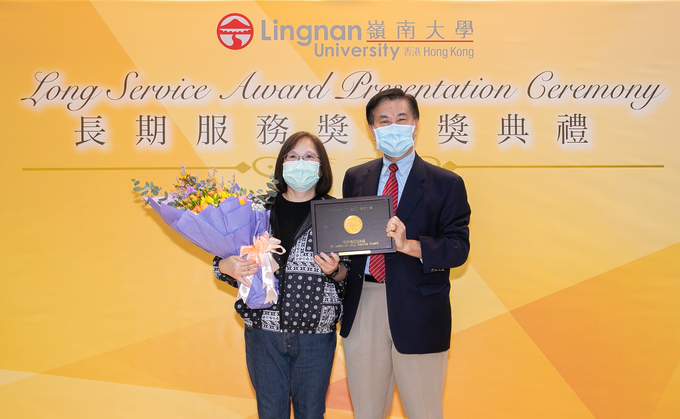 While it is not unusual for people to work as slashers — having more than one job at a time — or to think that changing jobs every three to five years is good for career advancement in this digital age, some stay at an organisation for years and then decades, simply for the belongingness and love of it.

Alice Yung Yuk-mui has been working at Lingnan for over 40 years. She was here when she married, gave birth to her daughter, and watched her graduate, and most recently Yung received a long service award. Yung was at Lingnan for its major milestones: when Lingnan College moved from its old campus on Stubbs Road to Tuen Mun in 1995, and when it received university status in 1999.

“It was one of the most memorable moments of my time at Lingnan,” the Registry Services Officer recalls. “Even though I was not playing a significant part in its becoming a university, I was very excited about it. Actually at that time, everyone at Lingnan was so united in wishing for it and we were thrilled that we made it.”

Alice Yung Yuk-mui has been working at Lingnan for over 40 years.

Yung experienced LU’s growth from a small college to the university it is today. “When I joined there were only three people -- the registrar, an officer and myself -- in the registry office, and today there are around 30.”

Yung has happy memories of the Stubbs Road campus, where everyone knew one another, and her daughter went to Lingnan Kindergarten when it first moved from North Point. “So we went to the campus and came home again together every day. It was handy,” she smiles.

Prof Simon Fan, Professor of Economics, says his 26 years of teaching and research at Lingnan have been excellent as the University provides full support and freedom for his academic pursuits. He sees a major change in his personal development though. “I become more and more philosophical. Because my research is mainly in social economics and social political aspects, I have learned how to explain and analyse social and political phenomena from theories of economics, and from my observations of Hong Kong as a free and attractive city.”

The COVID-19 pandemic has forced all universities to adopt online teaching and learning, and imposed a new approach and angle of teaching on Prof Fan, whose pedagogy focuses on outcomes and students’ needs. “I now focus more on students’ presentations and interactive teaching and learning. I have found that presentations give them room to solve problems independently and creatively,” he says, “our students are very intelligent and their presentation skills are very good. Lingnan students may not be star performers in examinations, but in my opinion they are definitely excellent presenters and problem solvers.”

As for his current research path, Prof Fan says. “I am now trying to contribute to the mission of integrating all disciplines of social sciences into a single discipline. I believe it is possible. In fact, this integration has been in progress for a long time, thanks to the important contributions of some great intellectuals, such as Gary Becker. I hope to be a part of this mission. This is the ambition and aim of my current and future research.”

Prof Li Donghui, Associate Vice-President (Student Affairs), joined Lingnan at about the same time as Prof Fan, but viewed Hong Kong differently then. While Prof Fan was attracted by Hong Kong and believes it is the “best place for Chinese scholars for research”, the city presented Prof Li with a challenging and rewarding cultural learning experience.

After teaching and studying in the US for eight years, Prof Li had decided to go back to Asia as she missed the Eastern culture, and she went to work at Lingnan in 1995, when it relocated and expanded.

“Hong Kong was far from the ‘Chinese society’ that I had been familiar with growing up in Beijing.  Back in 1995, I received good service if I spoke English, but no one would pay much attention when I spoke Putonghua,” she recalls, and this made things complicated for her teaching too. “Students’ Putonghua was not good enough to be able to understand me if I taught my class in Putonghua. So for the first year when I was teaching in the Department of Chinese, I had to teach my classes in classical Chinese poetry and literature in English.”

To improve teaching and learning results and to adopt Hong Kong’s way of life, Prof Li learned Cantonese in her spare time, but her best learning environment has been communicating with her students in hostel after she became the Warden of the Jockey Club Hall (E). “Without learning Cantonese, I would not have been able to communicate effectively with and understand my students’ feelings, and earn their trust so I can help them better.”

Her improving Cantonese allowed her to take a closer look at and enabled her to fully appreciate Hong Kong society and culture. “Once a student took me to her home in a public housing estate, where I was shocked by the tiny space she had — just the upper part of a bunk bed in which I found her ‘clothes closet’, ‘book shelf’, ‘working table’ and her bed all in one.  And, to my even greater surprise, she was quite content because she could manage everything so well. I came to realise how tough and determined Hong Kong students can be in the face of adversity, and be able to survive and indeed thrive.”

“And there was a translation student who always gave me Cantonese songs to listen to, to help me learn the language. He was very good at the guitar and music composition. One day, out of curiosity, I asked if his family could afford music lessons for him. On the contrary, his family was sharing a small public housing flat with his relatives’ family which had just immigrated to Hong Kong. The flat was so packed, and the relationship between the families was often tense. He had two spaces there: where he slept next to a door, a space that only existed when everyone else was asleep, and when he listened to music through his earphones. ‘In this world, everyone disappears but me,’ he told me, and that transcendental experience of his made a deep impression on me.”

As Prof Li’s empathy with her students grew, so did her dedication to help them, which led naturally to her taking on the role of heading up the Associate Vice-President (Students Affairs) in 2015. Prof Li always strives to create a caring and conducive learning environment for students. The innovative vitality and creativity of Lingnan students demonstrated via social media has deeply impressed her. Taught by her students, she was given access to all kinds of social media platforms through which the students’ complicated, innovative and fantastic world was opened to her.

When former President Prof Edward Chen Kwan-yiu positioned LU as a liberal arts university emphasising whole person development and language proficiency in students, he assigned an important task to young Prof Li who was trained in Chinese linguistics and literature in 1999:  to establish a nationally-accredited Putonghua Proficiency Testing Service in Lingnan.

“Without the consent of the Ministry of Education of the national government, we could not administer the National Putonghua Proficiency Test (PSC) that was fundamental to Lingnan,” she says. “I flew to Beijing to meet officials on behalf of the President, but in the beginning talks were not possible, as the Ministry had already partnered with four universities in Hong Kong and was not open to any new collaboration agreements. I didn’t give up though. With a strong belief in the mission of improving Lingnan students’ Putonghua level for their future competitiveness, I convinced them to make Lingnan the fifth Putonghua Testing Centre in Hong Kong.  With the President’s support, I organised the establishment of Lingnan’s Chinese Language Education and Assessment Centre (CLEAC).”

“Lingnan is small and beautiful, a place where one can feel care and the supportive spirit everywhere. It is like a family.  Everyone works hard for the betterment of this family as if it is their own,” Prof Li says. “Lingnan’s ‘people element’ brings Lingnanians closer, and strengthens LU as one of the unique liberal arts universities in Asia.”

In December, the University presented Long Service Awards to 89 staff members who have been at the University for over 15, 20, 25, 30 and 40 years in recognition of their dedication and contribution. Click here for more information.