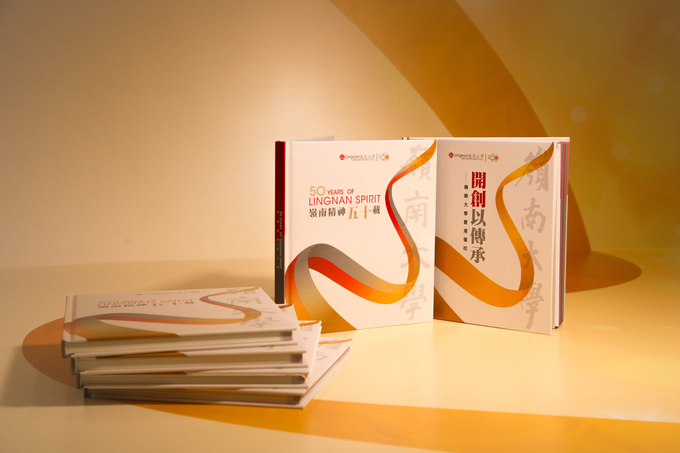 At the book launch ceremony, Prof Leonard K Cheng, President of Lingnan University said that the 50th Anniversary commemorative books reminisced the glorious achievements attained by the collective efforts of Lingnanians in the past, and inspire Lingnanians to continue with their relentless efforts in perpetuating the proud Lingnan Spirit.

“Despite going through countless changes, the passion, loyalty, perseverance, openness and serving heart portrayed by the ‘Lingnan Spirit’ have always been the University’s core values, uniting our staff, students, alumni and supporters.  The fact that Lingnan has travelled an arduous journey and attained the achievements we see today is a true demonstration of the ‘Lingnan Spirit’,” said President Cheng.

Published by Lingnan University and edited by Prof Lau Chi-pang, Coordinator of the Hong Kong and South China Historical Research Programme of Lingnan University, 50 Years of Lingnan Spirit features 50 prominent Lingnanians including the University’s founders, staff, alumni, students and friends.  It gives readers the interviewees’ personal insights and perspectives into how Lingnan was transformed from a modest institution into a leading Asian liberal arts university.

The book presents stories of Lingnan University’s founders who played crucial roles in helping it to achieve different important milestones through the decades – from the Lingnan College in 1967, to a degree-conferring tertiary institution funded by the then University and Polytechnic Grants Committee in 1991, and to a university in 1999.  It also includes special stories and fond memories of alumni and their days in Lingnan, and stories of many others whose lives were transformed by Lingnan’s unique liberal arts education.

On the other hand, The Old Spirit in a New Setting — The Hong Kong Story of Lingnan University, published by the Lingnan Education Organization with its Director Dr Simon Wu being the editor, traces the history and development of Lingnan as an institution over the past 50 years, in particularly the extensive contributions made by the Lingnan Education Organization in carrying on the fine traditions of Lingnan education in Hong Kong.

Both books are available for sale at Chung Hwa Book Co. and Lingnan University.