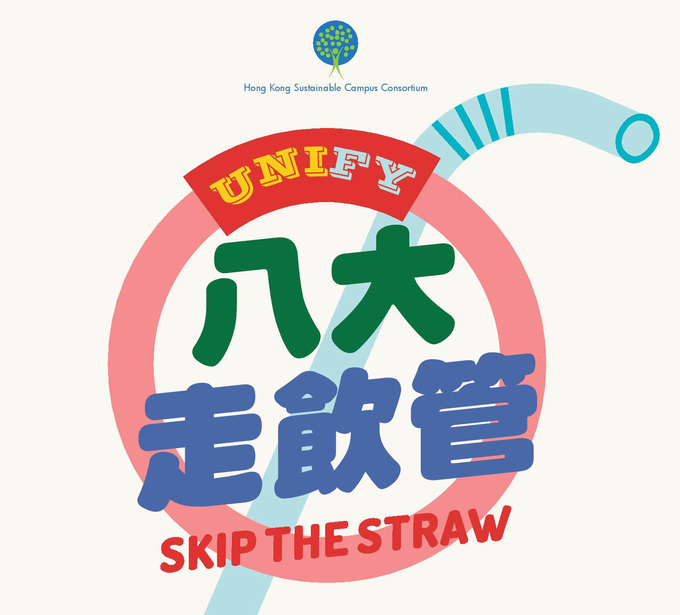 The universities have held a “No Straw Week” or “No Straw Day” on their campuses during the campaign, where campus catering outlets only offered straws when requested.  Other activities included film screenings, zero waste markets and reusable straw giveaways.  The universities have also pledged to introduce long-term measures including regular awareness campaigns and no straw days, or a campus-wide ban of plastic straws.

The campaign is supported and organised by the Hong Kong Sustainable Campus Consortium.  “I am pleased to see eight Hong Kong universities join together in the ‘UNIfy: Skip the Straw’ campaign,” said Prof Mark McGinley, Director of Core Curriculum and General Education and Professor & Head of the Science Unit at Lingnan University, who is the Convenor of the Consortium.  “Working together we can gain inspiration and ideas for best practices from our partner universities and can act as a significant catalyst for change,” he said.

To echo the campaign, the University’s Core Curriculum and General Education Office, Science Unit and Faculty of Arts organised two film screenings at Lingnan.  Screening of the film Plastic China in collaboration with CNEX Foundation Limited was held on 15 March.  It documented how wastes were recycled by the bare hands of two families in a plastic recycling facility in China, and discovered their dilemma about life just to make a living.  Mr Allan Wong, Vice President of Hong Kong Scrap Plastic Association and Prof Paulina Wong from the University’s Science Unit were invited to share their insights and ideas about the waste management policies and technologies in Hong Kong and how China’s ban on foreign waste will create challenges to the recycling industry of Hong Kong.

Another film A Plastic Ocean was shown on 22 March in collaboration with the Jane Goodall Institute Hong Kong.  It is an adventure documentary shot on more than 20 locations to reveal the causes and consequences of plastic pollution in the world’s oceans.  Mr Willy Kwong, Executive Director of the Jane Goodall Institute Hong Kong and Prof Mark McGinley, were invited to share their insights and suggestions about the plastic waste management in Hong Kong.