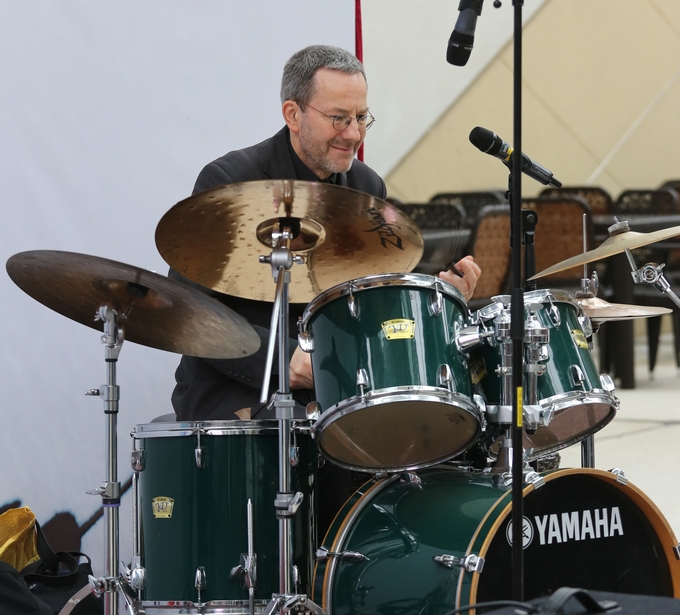 Lingnan welcomed Mr Andrea MARCELLI from Italy, who has been appointed the University’s first Musician-in-Residence from 19 September to 31 October. A drummer and composer, Mr Marcelli was born in Rome and graduated from the Conservatory L.Refice after training in Classical Clarinet for 7 years and Jazz Arrangement/Composition for 4 years. Before arriving in Hong Kong, he lived and worked as musician in Los Angeles from 1989 to 1997, in New York until 2001, and in Berlin since. Throughout his career, he has earned success from his extensive performances on five continents, playing with renowned musicians around the world and releasing many albums – including six in which he played as a leader.

Mr Marcelli has chosen to come to Hong Kong for a unique personal reason. Having travelled the world for the last 30 years – 12 years in USA, 17 in Germany, and the rest in Africa and Japan, he has seen and lived in different cultures, yet he never finds another city quite the same as Hong Kong where there is an inimitable mix of western and eastern characteristics. He already got this impression on Hong Kong on his first visit to the city for a concert in 2014. “I also see in myself a blend of different things,” said Mr Marcelli, “For even though I decided to become a musician, I once considered becoming a painter as well. In my music career, I have also played a variety of instruments from classical clarinet to jazz drums for many years.” In his view, diversity is a direction that the world is going toward in the future.

Why did he choose to come to Lingnan? Mr Marcelli feels that he particularly values the freedom to teach what he wanted at Lingnan. The trust between the University and him was an important factor for his acceptance of the position. On the one hand, Lingnan believed in his ability to bring new musical elements to the campus which benefit the staff and students; on the other hand, he saw numerous possibilities for him to connect with the students – who are kind and respectful – and work with them in an uplifting campus environment. “On my first day in Hong Kong, I went straight from the airport to the classroom at Lingnan,” he recalled, “The question on my mind when I walked into the classroom was how I could connect with the students here. It has so far been a beautiful beginning for me at Lingnan.”

During his time at Lingnan, Mr Marcelli brought a message to students: Rhythm and melody have healing effects. Music itself can help us get through difficulties in a peaceful way. It acts like a safe island where we can go to every day, and reflect on ourselves. Oftentimes, music is given to us by the radio or the Internet, and we let someone else take charge of what we listen. However, it is important to search for the kinds of music that we really feel passionate about. The solution that Mr Marcelli proposes is to go through this search process by playing instruments. He compares playing instruments to sitting on a train and going along with the rhythm of the train’s motion. When playing freely with one another, we may have a dialogue with other human beings through music and experience the search together – this is what Mr Marcelli tried to share with Lingnan students.

During his residence at Lingnan, he had been instructing on Thursdays and Wednesdays to groups of students. He also taught a creative ensemble made up of around 20 instrumentalists. On 10 October, he collaborated with other local and international musicians to perform in a concert. During the past weeks, Mr Marcelli tried to include as many students as possible in his lessons. Throughout his work, he aimed at helping students find their own inspiration and discover their creativity. “We did certain things in a certain usual way in our normal daily life or in our job, until we stumble upon an obstacle. To overcome the obstacle, we must find a solution and that is when we need creativity. I hope students can discover creativity within themselves, and realise that they are able to not only apply it to a job, but also other aspects of life,” said Mr Marcelli.

Apart from teaching and performing, Mr Marcelli enjoyed exploring the environment around the campus on foot. He actually went hiking behind the campus, walking almost 2km up the hill and another 600 stairs up from the Tuen Mun trail!