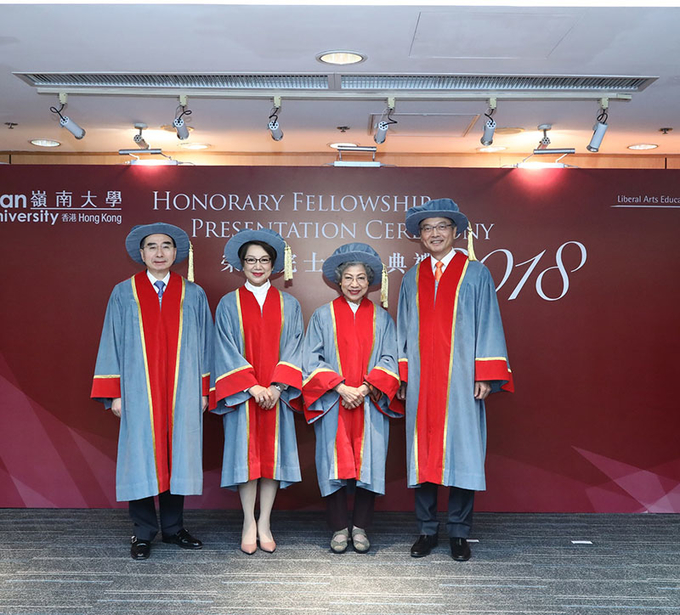 Lingnan University’s Honorary Fellowship Presentation Ceremony 2018 was held on 11 October, during which the University conferred honorary fellowships upon four distinguished individuals in recognition of their outstanding achievements in their respective professions and valuable contributions to the well-being of society.

Dr the Hon LAM Ching-Choi delivered an address at the Ceremony on behalf of the honorary fellows and expressed their gratitude to the University for conferring upon them the honour. Dr Lam is pleased to be part of the Lingnan family. He pointed out that Lingnan University’s liberal arts education, which is informed by the best of Chinese and Western traditions, is time-honoured and the fruit of the collective efforts of numerous educators. He also encouraged all Lingnanians to carry the torch of the Lingnan heritage and pass on the “Lingnan Spirit”.

Dr Lam said, “Throughout the changing times, Hong Kong has risen to global prominence, facing more and more opportunities and challenges.” He encouraged everyone to pull in their efforts and set great examples that the younger generation could emulate, like what the outstanding awardees had done.

The ceremony, presided over by Mr Rex AUYEUNG Pak-Kuen, JP, Chairman of the University Council, was held at Chan Tak Tai Auditorium on the campus of Lingnan University. Please click here to read the citations and address of the honorary fellows.