Cultivating an international perspective by means of Chinese culture education 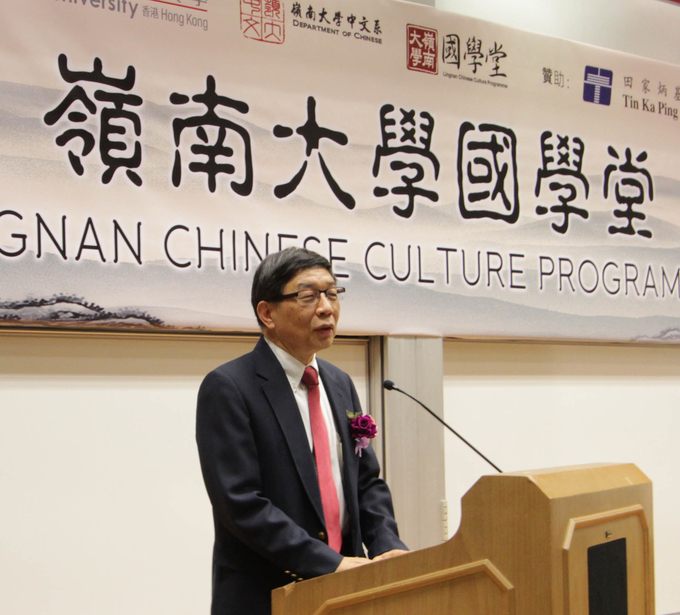 The Programme provides six free lectures for the general public every year as a medium of instruction on a volunteering basis.  Renowned scholars will be invited to cover different areas of knowledge on traditional Chinese culture.  As the Director of the Lingnan Chinese Culture Programme, Prof CAI Zong-Qi, Lee Wing Tat Chair Professor of Chinese Literature and Director of the Centre for Humanities Research said, “Our target audience is the entire society, those who are interested in Chinese literature, including secondary school students, retired persons of the Elder Academy, etc.  Furthermore, we also hope secondary school teachers can attend, so as to improve their literacy in Chinese culture studies, which is an advancement for teaching.”

“Lingnan University has a glorious tradition in the research field of Chinese culture, which comes from the rich Chinese culture foundations built by scholars from past generations.  I hope that these brilliant achievements not only be inherited within the Department of Chinese, but be promoted and contributed back to society through the experience and knowledge of Chinese culture that we have explored for years,” said Prof Cai.  As early as in 2005, the University received a grant to invite renowned international scholars as visiting scholars to promote the exchange on Chinese culture studies, which had been suspended after several years.  When Prof Cai returned to Lingnan as a Chair Professor in the Department of Chinese in 2013, he initiated the idea of re-launching the exchange of Chinese culture studies.  He put forward the concept of Lingnan Chinese Culture Programme into a proposal and won the support of Tin Ka Ping Foundation, which also endeavours to promote education. His idea was turned into action.

Prof Cai pointed out that the introduction of Chinese culture studies has no conflict with Western doctrines. Instead, it integrates the merits of both to enrich the spiritual world.  He remarked that, “Chinese culture studies is the core of liberal arts education.  Liberal arts education is about how to make use of critical thinking to live up to a humanistic tradition.  Both Chinese studies and Western studies belong to humanistic traditions, in which the ideals pursued echo each other.  If you get in touch with both the Chinese and Western traditions, you can broaden your horizons and assemble the best of civilisation.  It’s a non-separated way of communication that fosters students to become world citizens.  As long as you have an international perspective, you can manage decision-making, work, life, living attitudes, and so on.”

There is a saying that goes: Reading is always rewarding.  When talking about Chinese culture education, Prof Cai encourages everyone to read more.  Reading rewards people with rinse of mind and peace to mood.  “Classical literature contains rich thoughts and emotions.  Reading allows one to exchange thoughts with the ancients and in simple words ‘make friends’ with them, in order to expand life to the past and to the future,” he explained.  He believes that in today’s utilitarian society, modern people should learn to abandon materialism and pursue a peaceful mind; as long as they are enthusiastic about the world of books, they can find peace and happiness of the soul as a spiritual comfort.

The Lingnan Chinese Culture Programme has received a funding for three years from the Tin Ka Ping Foundation.  Participants who have attended the lectures for ten times will be awarded a certificate of completion as a token of encouragement.  In particular, Prof Cai expresses gratitude towards Lingnan stakeholders for their overwhelming support, which brings more positive energy to society.